After Buying Wibiya For $45M, Conduit Discontinues Product As It Shifts Away From Toolbars
Google Updates Glass With Transit Directions 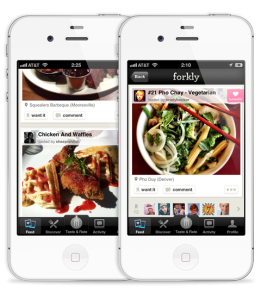 Forkly, a Foodspotting competitor launched back 2010, is shutting down. Well, sort of – it will remain open for six to eight months, and maybe more, while looking for a new home, we’re told. It looked like bad news for the company when one of its co-founders, Martin May, left the startup to join as CTO at Push.io, and now we’ve confirmed why: Forkly is “in transition.” The company, for those unfamiliar, was notable mainly for its creators: Brightkite founders May and Brady Becker. With Brightkite, the team was well ahead of the check-in trend that later led to companies like Foursquare, with the launch of one of the first apps to combine social, mobile and local to form a new kind of network.

But Forkly was not quite as groundbreaking. Its emphasis was more on rating individual food items and dishes in order to discover what’s good where, not just sharing pictures of your meal. The idea was to help users build their own “taste graph,” meaning a personalized profile of what you like to eat. In February, the company launched a revamped app they called “Forkly 2.0,” which was designed to make that taste graph more useful through personalized recommendations.

Unfortunately, Forkly wasn’t very differentiated from Foodspotting – at least in the eyes of consumers. In addition, it and other food-focused social networks and review platforms have also had to contend with the rise of other companies, like Yelp for reviews, Instagram, where users like to post their meal photos, and, ironically Foursquare, which also lets you find what’s good to eat nearby.

Forkly took in $200,000 in seed funding back in May 2011, followed by $700,000 in March 2012, according to its AngelList profile, which hasn’t posted an update for seven months, as of the time of writing. Investors included Jeff Miller (founder of Punchfork), David Cohen, Jim Deters (CEO at Galvanize), and others.

The profile also notes that the app had roughly 300,000 users on iOS, and an Android version was due out in March 2013. However, that Android app never launched – the site still lists the app as “coming soon.” Meanwhile, the iOS app has not been updated since this July, and May left for Push.io in September, according to his LinkedIn profile.

Though the Forkly app is still live in the iTunes App Store, it’s ranked #320 in the “Food & Drink” section, according to the latest figures from App Annie – a metric that indicates the app failed to gain significant traction in its niche, or perhaps ran out of money to continue its user acquisition efforts.

According to TechCrunch sources, Forkly is indeed in the process of winding down operations, but it hasn’t been fully closed down yet. A more formal announcement has yet to be made. That’s why the app is still available for download on the App Store.

We reached out to May and Becker about several hours ago, and while both responded quickly with an offer to comment, we didn’t yet hear back by the time of publication. We’ll update the post with additional details or those comments when provided.

Update: According to Becker, management of Forkly is being taken over by investor Steve Croake, while both founders are moving on. The company is now shopping itself around to other larger firms, where it could be a good fit. He says some discussions are underway now.

“The technology is really awesome, we have a great community and great data, but it’s not really being monetized at the moment,” says Becker of Forkly. “Martin and I have other opportunities in front of us. We’ve been working on this for two and a half, almost three years. It’s time for us to move on,” he explains.

Becker is remaining for now to help during the transition along with a couple of others. He’s also working on some side projects including a new travel site called Inside.co with blogger, Startup Weekend founder, and TechStars Boulder’s former community director Andrew Hyde. He also has a project underway at DramApothecary.com.