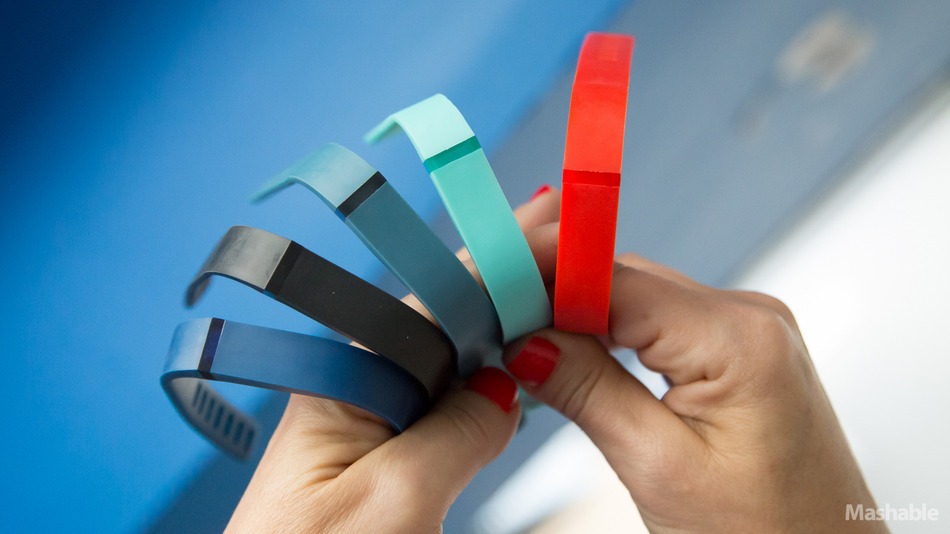 FitBit has long been doing fitness wearables a lot longer than others, but now it’s taking its heath-tracking technology to the next level with a fitness wristband — and it’s one of the most impressive options we’ve seen so far.

The water-resistant FitBit Flex wristband tracks just about everything you do — from the steps you take to how well you sleep — and can even handle laps in the pool. Although the FitBit Flex was first announced at the 2013 International Consumer Electronics conference in January, it’s been generating significant buzz since it’s May debut.

The company hasn’t released sales numbers, but it’s been climbing Amazon’s Top 10 list in the health monitors category. Priced at $99.95, it’s about $30 cheaper than most of its competitors, including the Nike+ Fuelband and the Jawbone UP. All of these devices aim to get you up, take the stairs and keep you moving toward a healthier lifestyle.

Similar to previous FitBits, the FitBit Flex tracks your movement around the clock, even when you’re asleep. This means every step taken, every calorie burned and every minute you snooze is tracked and stored. It syncs those stats wirelessly to computers and smartphones (iOS and some Android models, including the Samsung Galaxy S3 and Galaxy Note), so you can monitor real-time progress and charts and also set up goals.

The Flex is a Bluetooth Smart Ready device, meaning its wireless connection consumes very little power — a huge bonus for on-the-go users and a big differentiator from competitors like the Jawbone UP. It offers people the flexibility to sync their data without needing to plug into a computer or phone. It’s incredibly easy to sync, requiring only that the FitBit app to be open and the device to be nearby.

It may not be the most fashionable high-tech accessory we’ve seen, but it’s simple and not as clunky as the Nike+ Fuelband.

With each iteration of the FitBit, the device has gotten smarter. It may not be the most fashionable high-tech accessory we’ve seen, but it’s simple and not as clunky as the Nike+ Fuelband. Its rubber exterior may lack the sleekness of the Jawbone UP, but its bendiness makes it more comfortable on the wrists. The softness is also less disruptive if you accidentally hit yourself in the face while you sleep or play sports, and the adjustable band ensures it stays on regardless of wrist size.

It also comes with two different band sizes: large and small. Although this sounds like a great perk in theory, it would probably make more sense and be less wasteful if you pick the size you want ahead of time (how much does our wrist size change over time, really?).

The good news though is that the FitBit Flex is light and easy to forget you’re even wearing it. But it’s not easy to conceal. Anticipate that people will ask you what you are wearing and if you are trying to watch your weight. 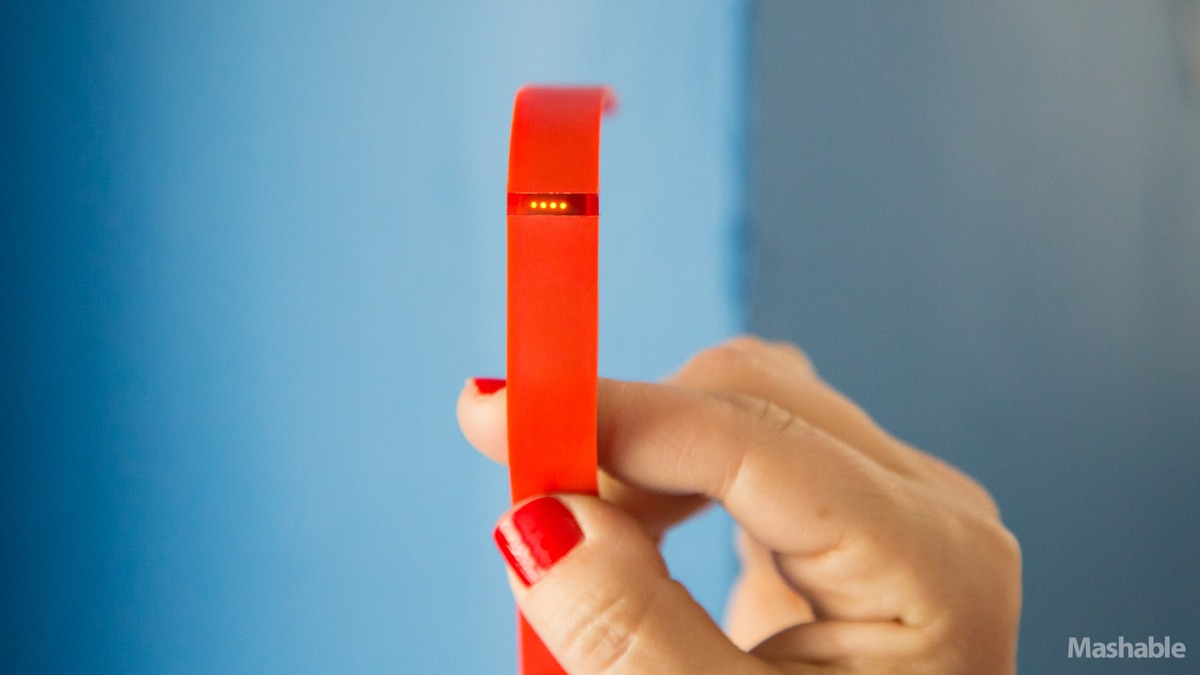 You can buy the wristband in an assortment of colors. The actual gadget is exposed on the inside, making it easy to pop it out of the band, but this actually adds an inconvenient step to the charging process. As opposed to the Nike+ Fuelband, which has an integrated USB input, users have to charge the FitBit Flex with a separate USB charger. You need to snap the USB dongle out of the Flex and position it into the charger for refueling. Plus, if you use the dongle, you’re out of luck. Still, battery life is impressive and can last almost a week. 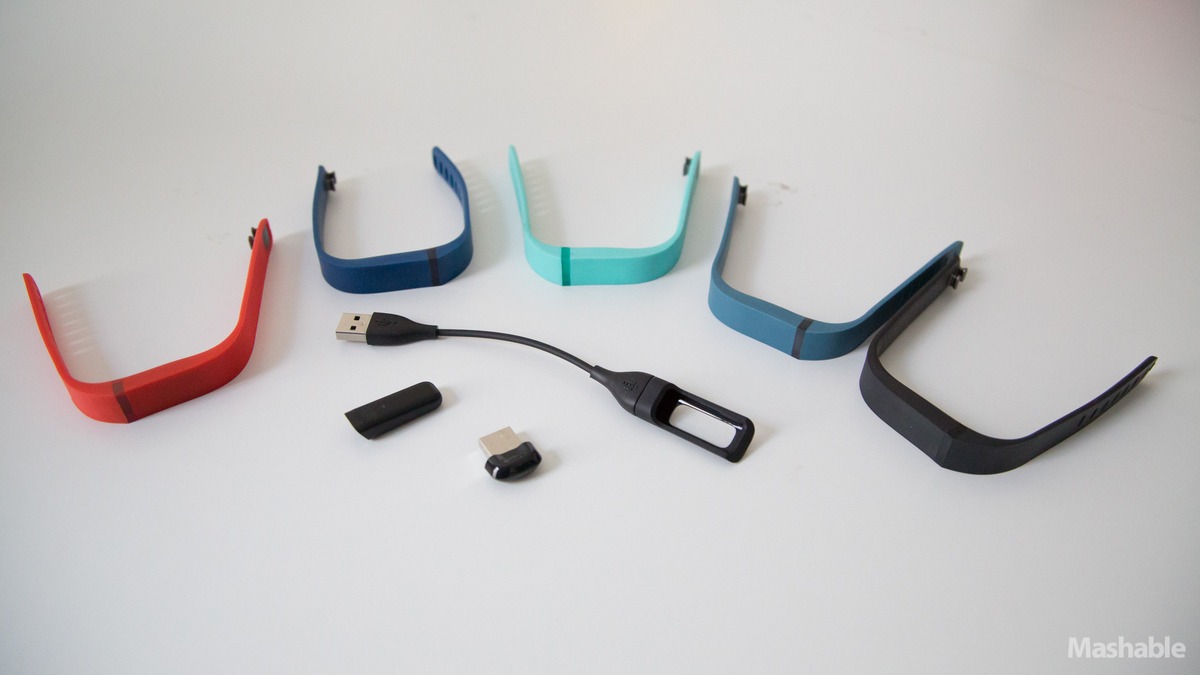 The Flex is relatively durable and can ensure some mistreatment. It can also resist water for stints in the shower and swimming pool. By double tapping the top of the band, the tracker reveals lights that shows you how close you are to your daily goal. When you reach the goal, the device will vibrate. Meanwhile, five taps at the top will tell the device when you’re headed to bed and another five will wake it up.

The Flex is helpful for those looking to learn more about how they sleep too. It collects information about how many times you wake up in the middle of the night and helps you play detective as to why you might not be sleeping as well as you could be. Another neat feature is it silent wake arm which buzzes you via vibrations so it doesn’t wake up your partner. But unlike the Jawbone UP, which will actually wait until your in a lighter stage of sleep, the Flex is set to go off at a designated time.

It’s also possible to connect with friends who are also using the FitBit Flex. In this case, I was able to see a friend’s steps and active hours, as well as a 30-day graph tracking their progress. Users can opt in to sharing more information such as food intake, activities, sleep details and a personal journal, but these areas can also be kept private. 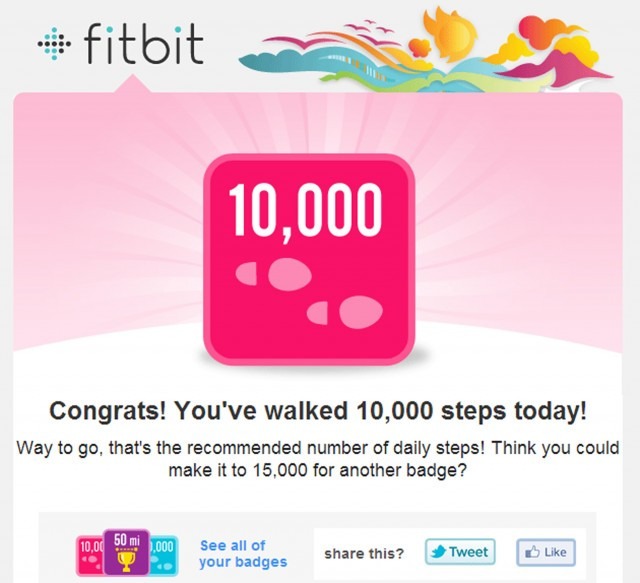 Racking up badges and staying connected with friends helps you keep at it, especially when it comes to longevity and not losing steam after the first few days. You can also post these milestones to Facebook and Twitter.

Although the FitBit Flex has a lot going for it — and can truly be integrated into almost any lifestyle — it’s possible that the biggest advantage to having any wristband health tracker is that it’s a constant reminder to stay active. Even for people who aren’t hitting the gym every day, a tangible device which sits on your wrist and occasionally blinks and vibrates is a gentle nudge to stop sitting around.

So if you’re considering a wearable health tracker, the Flex has it all: it syncs wirelessly, it’s cheaper than competitors and it’s durable. There’s no word yet about when it could come to more Android devices, which could in fact be its biggest flaw.

What do you think of the FitBit Flex? Are wearable tech devices a fad or here for good? Let us know your thoughts in the comments below.