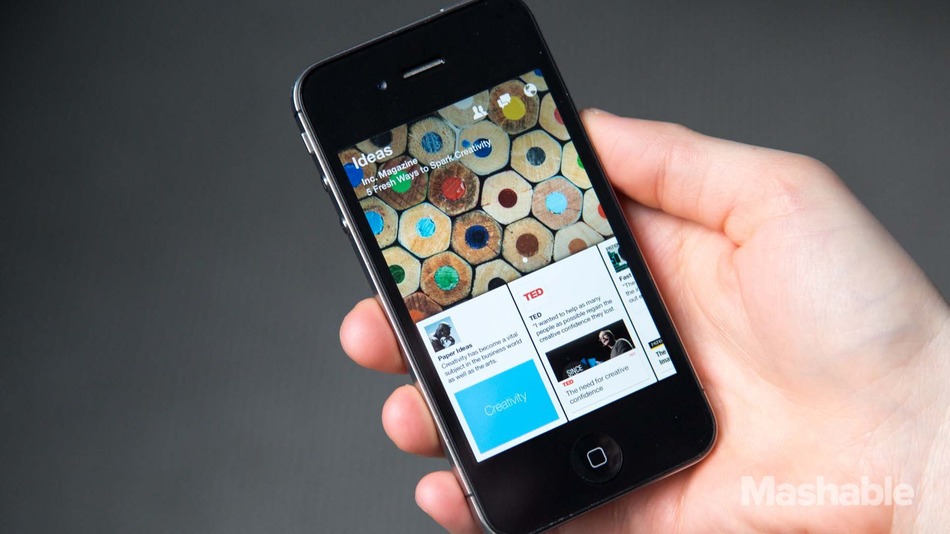 For starters, the standalone app took the company nearly 30 months to build — a lifetime by Facebook’s “move fast and break things” standard. When Paper was finally unveiled, many users were pleasantly surprised by the app’s design, which is image-heavy and — with the exception of a few buttons in the upper righthand corner — looks next to nothing like the Facebook app with which we’ve grown familiar.

While not unexpected, the app was still uncommon. Facebook has built five other standalone apps over its 10-year-existence, including the traditional Facebook app. That group includes one app you’ve probably never heard of (Facebook Pages Manager is just for Page admins), and another Facebook hopes you never will (Poke, a Snapchat look-a-like intended for the general public, hasn’t been updated since its release in December 2012).

Which brings us to Paper, an iOS app with a restructured news feed and multiple reading sections intended to surface new content on Facebook. Though it seemed like a hit at first, Paper has since dropped on the App Store charts. Users are still trying to figure out exactly where Paper fits in with their social media use, if at all. By making Paper a standalone app, Facebook is betting that users will find it useful despite similar competitor apps already available.

The real purpose of Paper is not about news

Paper has been widely labeled a news reader by the media (Mashable included), but that’s not actually how Facebook intended it.

On Paper, users can flip between sections they choose to follow, like tech or sports or food; the app surfaces relevant articles from Facebook. One of these sections is the news feed, and users can post to their Facebook profile from within the app.

The sections are what drew comparisons to other news readers like Flipboard and LinkedIn’s Pulse — but it was the publishing aspect that the Paper team intended to build out, says Paper Product Manager Michael Reckhow. Paper wasn’t just built for consuming; it was built to offer users better tools for sharing and creating their own content.

In fact, the developers didn’t even begin creating the sections within the app until late 2013, nearly two years after the idea for Paper took shape.

“We’re all comfortable with doing something that, in the first incarnation, may be a little misunderstood.”

This philosophy dates back to Reckhow’s days at Amazon, where CEO Jeff Bezos pushed a similar mindset. At Amazon, Reckhow worked in digital books — and that was what drew him to Facebook. He liked the social network’s potential for creating publishing tools for the masses.

It was a vision he shares with another member of the Paper team, Mike Matas, the design lead whose publishing startup Push Pop Press was acquired by Facebook in August 2011. Matas was the first person at Facebook to work on Paper. He came to the company with design ideas for news feed, many of which were funneled into Paper instead.

On a basic level, publishers really need two things: an audience, and tools to create and share their ideas. Facebook has always had the world’s greatest audience — now 1.2 billion and counting — but the publishing tools lag behind.

“Facebook at the time — and to a certain extent now — doesn’t feel fully optimized as a place for people who spend a fair amount of time creating some form of content,” says Scott Goodson, engineering lead for Paper.

“The process doesn’t really give you the sort of sense that your content is going to be presented in the ideal way or a way that you can really control very directly. In some sense, it’s very generic.”

Paper users can see more clearly what their published product will look like on their news feed. It’s a more accurate and visual representation of what the user is creating. While this publishing element may be overlooked for the moment, it will remain a core feature as the app team moves forward. 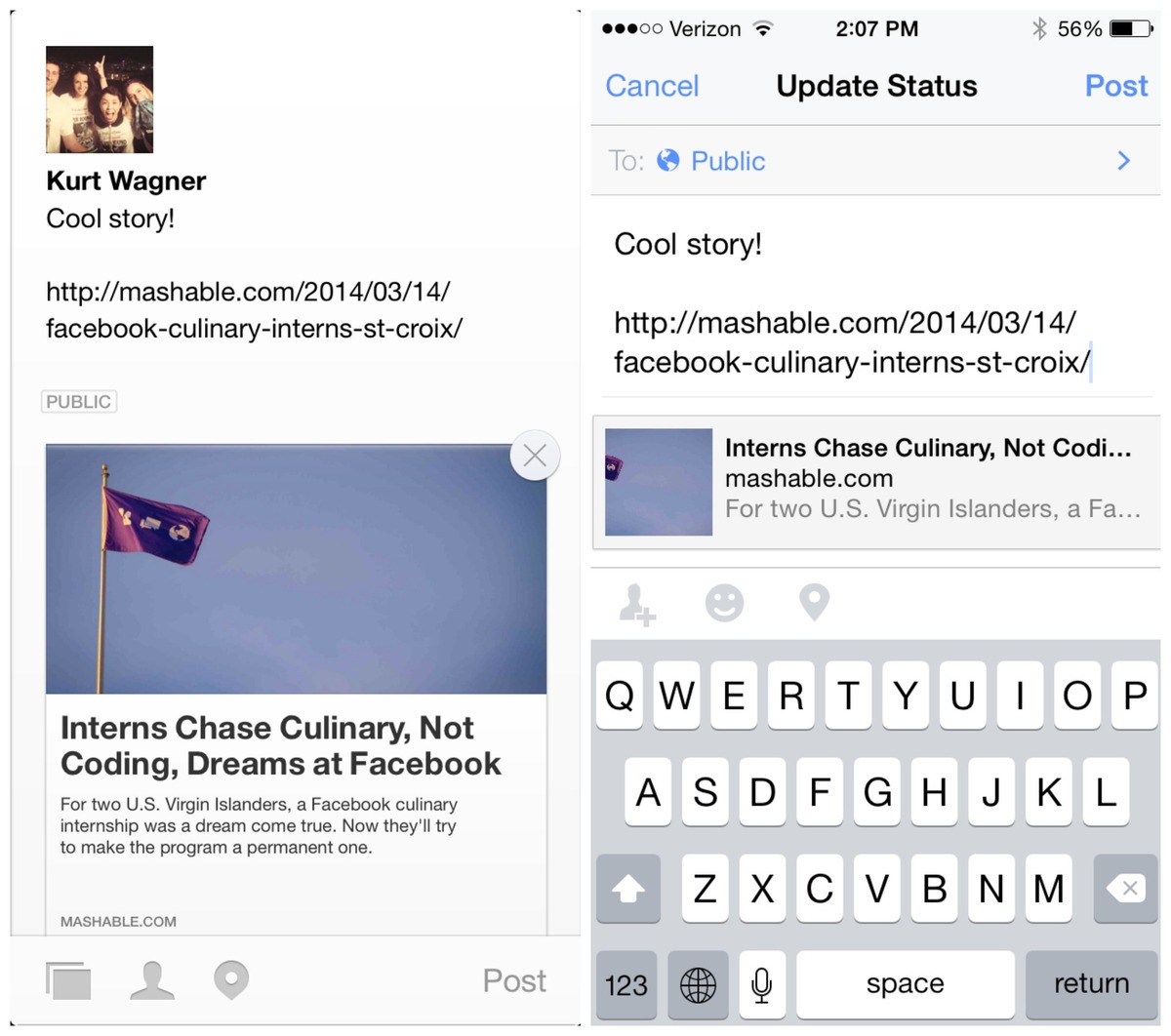 “We’re really focused with Paper on playing out this vision and continuing to build it for the long run,” says Reckhow. “As we start to build it, I think people will really start to see what we’re doing.”

Much of that message will rely on Paper’s design, the most surprising aspect of the app. Compared to the Facebook app, which features a search bar and a slew of clickable buttons and tabs, Paper is clean and simple. Large photos span the width of the screen atop each section, and stories appear as tiles below. There are only three clickable buttons, all in the upper righthand corner.

Matas started building out his ideas for news feed, using his experience in e-publishing to visualize new ways users could share and consume content. At the time, Paper was in its infancy, and the team was essentially a one-man band, with Matas testing designs on his own using an internal design tool called Origami. The program allowed Matas to build prototypes of the app without actually needing to code, a strategy he used until Goodson joined as engineering lead in February 2012.

The Paper team spent the majority of that year setting the engineering framework needed to actually build the app. This was a technical challenge for a number of reasons, says Goodson, the most obvious one was that the existing news feed was practically being thrown out the window. The new design for Paper required new backend support, a hefty undertaking.

The app also features more high-quality images that require lots of memory, not to mention a vast amount of what Goodson calls “physicality,” or the ability to engage with the app through the touch screen. One of the app’s distinct features allows users to swipe up on the screen to open articles, while swiping down folds them closed.

By the time Reckhow joined as product manager in November, Paper had five engineers along with multiple designers. It was around this time that Reckhow and the team began the process of transitioning from a prototype to a finished product.

In addition to creating publishing tools, the Paper team had one other major focus: building a mobile-only app. Unlike other Facebook apps which use existing features taken from web, Paper was a completely redesigned news feed. The team could build it however they wanted, independent of the company’s existing apps. 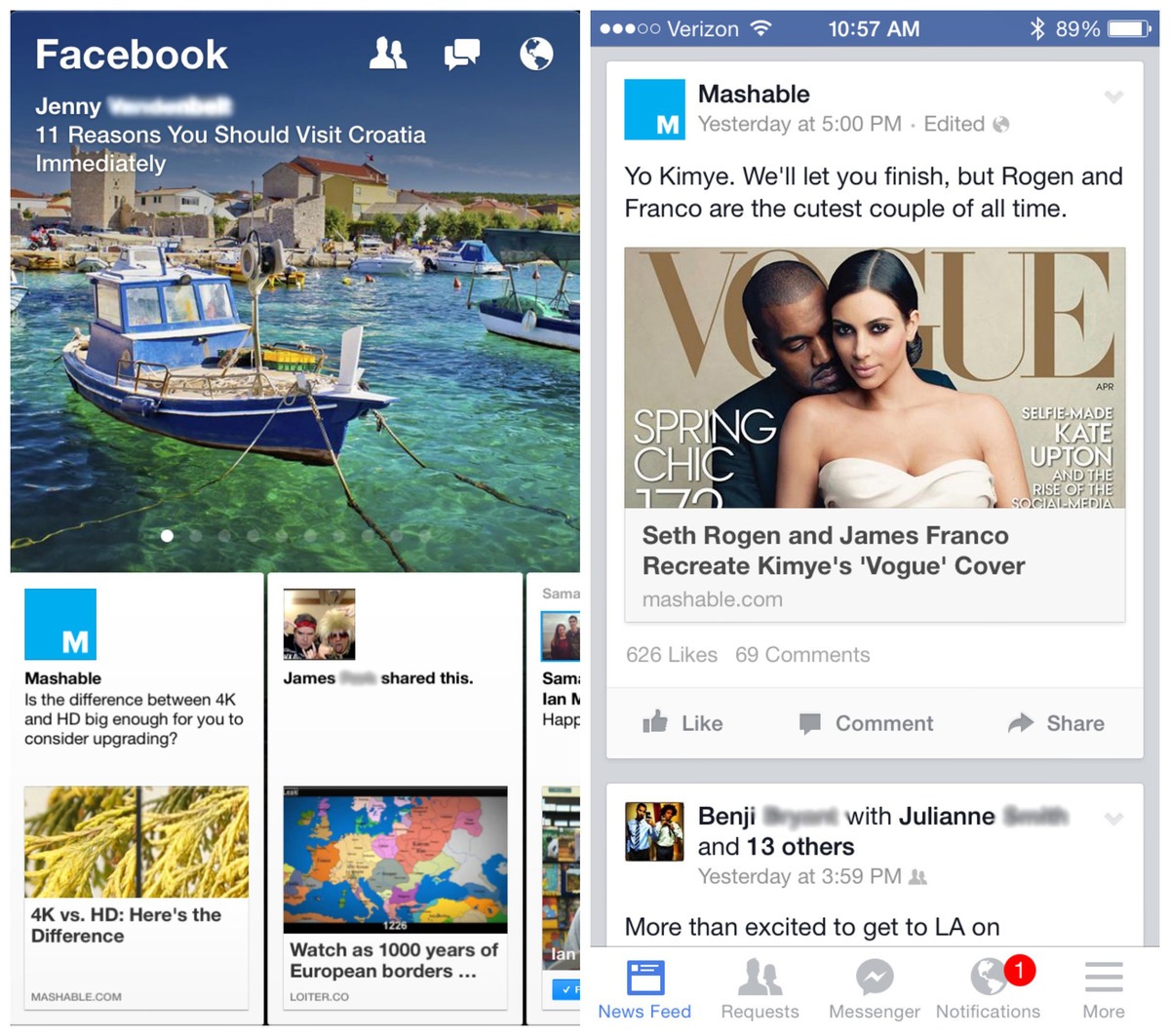 Unlike the traditional Facebook app, news feed on paper scrolls horizontally, not vertically, a subtle change but one that reflects this “mobile-first” mindset. Smartphone users swipe horizontally on their home screens, and popular apps like Weather and Photos on iPhone work the same way. Swiping horizontally also opened up the vertical swipe, allowing the team to build the fold open, fold closed element of the app.

This radically different design was one of the main reasons Paper wasn’t simply built into the existing Facebook app. Technically, the changes were too drastic for the existing news feed infrastructure. Plus, changing news feed’s design without notice would have probably resulted in a mass panic by users.

By the midpoint of 2013, the Paper team was close to full strength — roughly 15 people, 10 of which were engineers and a half dozen of whom were former Apple employees, including Matas and Goodson. (Paper is only available on iOS and there are no plans for an Android app at this time, says a spokesperson.)

The Apple aspect was far from coincidental. The team’s experience with Apple software was certainly helpful, but there was an even more beneficial reason. Goodson estimates every team member knew at least three others on the team from previous projects or jobs. They knew how to work together, says Goodson, an important detail when working on the same project for multiple years.

Multiple years. It’s a long time for a company with Facebook’s resources to spend on an app, particularly when the company already had the user base and content available. But at Facebook, there’s a long term commitment to Paper, and no one’s in a rush.

Each will be designed and built by its own independent team, which fall under the Facebook Creative Labs umbrella. Each team has its own set of designers and engineers, meaning the apps will most likely feel different. And, while teams are vaguely aware of what others are doing, they often don’t know details about what else they’re building.

The Paper team won’t simply move on to building Facebook’s next app — they’re working on Paper for the long haul.

For now, the team is focused on studying how users engage with Paper in order to add new features as necessary. The end goal is a mass market app, but that takes time, a luxury Reckhow and his team can actually afford at a place like Facebook, where money and user growth aren’t an immediate priority.
Is Paper too late?

This patience may be key for Paper, which stormed out of the gates when first unveiled before tumbling out of the top 100 free iPhones apps less than one month after launch. On Saturday, Paper fell out of the top 1,000 iPhone apps for the first time, according to App Annie.

That may be a result of an over-saturated market for news reader-style apps, says Brian Blau, research director for consumer technology at Gartner, who added that he finds Paper to be “compelling.” Flipboard poses the most obvious competition in the news reader space, but others like Feedly and Pulse have also garnered user attention.

“The competition is pretty heavy, there are many many of these types of apps out there,” says Blau. “It may be a bit too late to sort of capture what Flipboard did, or what Zite did, or what Feedly has done.”

Adding additional publishing features may not be the answer, either. Blau didn’t think of Paper as a publishing app, most notably because the first thing he was asked to do after downloading the app was to select sections to follow. The tools are nice, he says, but they may not be what people want.

“Is [content creation] the main, core activity people want to do? I fundamentally don’t think so,” he says. “I think it’s about consumption versus production.”

Paper will continue to expand its features, and Facebook is already collecting data in order to personalize the content users see. Paper also has more features in the pipeline, but Facebook isn’t spilling the beans on what’s coming. It’s likely Paper will continue to add publishing tools, building an experience that aligns more closely with the way the creators envisioned the app.

There’s no plan to replace the existing news feed design within the main app with the Paper design, says Reckhow, although he says nothing is off the table.

“We know that down the road, when we build this experience that we’re ready to introduce to many more people, we have a lot of great channels to do that,” says Reckhow. “We have a commitment from Mark [Zuckerberg] to be in this for the long haul, so he has an expectation that it takes time to build a great product before you build a mass market product.”