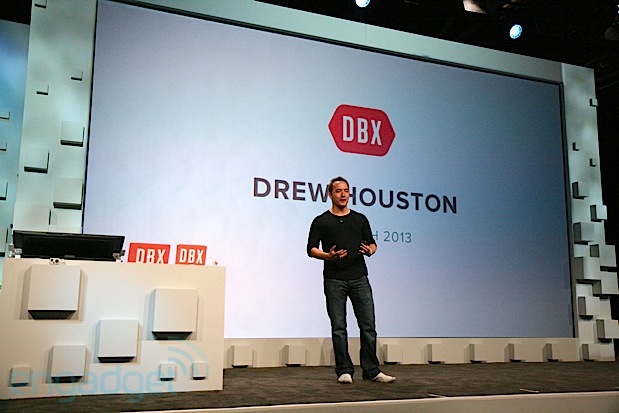 At Dropbox’s first DBX developer conference in San Francisco, CEO Drew Houston announced the Dropbox Platform, a suite of developer tools that make it easier for apps to sync data — not just files and folders — across devices and operating systems. Built on top of the Sync API, Houston said the new Dropbox Platform is designed to “replace the hard drive” and that “sync is the new save.” A key component of that is the Datastore API, which lets you sync data like contacts, to-do items and game state — so you can save your Angry Birds level across your different gadgets for example.

Another platform element is the “Drop-in,” which are a few lines of code that developers can use for cross-platform compatibility. Two such drop-ins are the “Chooser,” which gives apps instant access to files in Dropbox, and “Saver,” which provides one-click saving to the cloud. These tools have been around already, but are just now available for native iOS and Androd apps. Some of the third-party companies that have signed onto the new Dropbox Platform include Shutterstock, PicMonkey, Asana, Yahoo! Mail, Animoto, 1Password, CloudOn, FedEx and Fargo.

As part of the announcement, Dropbox also touted a new feature for Mailbox — that much-hyped app that Dropbox bought in March. It will now finally be able to send attachments directly from the app, which is something that the native iOS client can’t do. All you’ll have to do is tap the paper clip icon to open a list of Dropbox files, select your file and away you go. However, we’ve not yet heard just when this app update will be rolling out. We’ve included a screenshot of the Mailbox interface after the break. As for the developers amongst you, feel free to head to the source to get more details on the cloud storage company’s new platform. 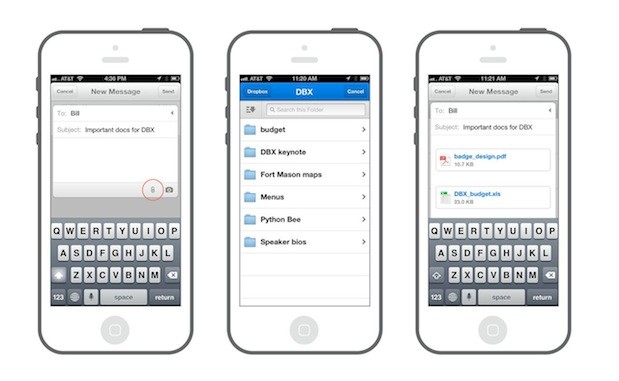