Maybe Netflix’s original content isn’t quite ready yet, after all. Today, a spate of bad news for the streaming service: its “Arrested Development” reboot failed to impress TV critics, and shares fell 5 percent as a result this morning. Meanwhile, angry parents are giving Netflix hell for its decision to drop popular kids’ shows like “Dora the Explorer” and “SpongeBob Squarepants” from its network – a result of the company’s decision to end its licensing deal with Viacom, as previously announced.

For starters, you’ve been living under a rock if you hadn’t heard that Netflix was bringing back the one-time fan favorite and critical darling “Arrested Development” this month. The company had been promoting “Arrested” in every which way possible, with a series of goofy marketing stunts ranging from Easter eggs on Netflix.com to fake emails and even a frozen banana stand in New York, among other things.

The buzz was palpable. In the week ahead of the big May 26 debut, the show saw over 170,000 social interactions from April 26 on, 77 percent of which were positive, compared with just 51,045 (68 percent positive) for its Kevin Spacey-backed original show “House of Cards.”

Given that the “Arrested” relaunch fell over a holiday weekend here in the U.S., the new show should have been a runaway hit. People had plenty of free time to binge-watch Season 4, and many of them did just that.

According to early reports from network intelligence company Procera Networks, about 10 percent of viewers made it to episode 15.

The show, by the streaming numbers, was a hit. One of Procera’s DSL network clients saw 36 percent of devices watching Netflix on Sunday make it through at least part of one episode – three times the number it saw when “House of Cards” debuted (11 percent). 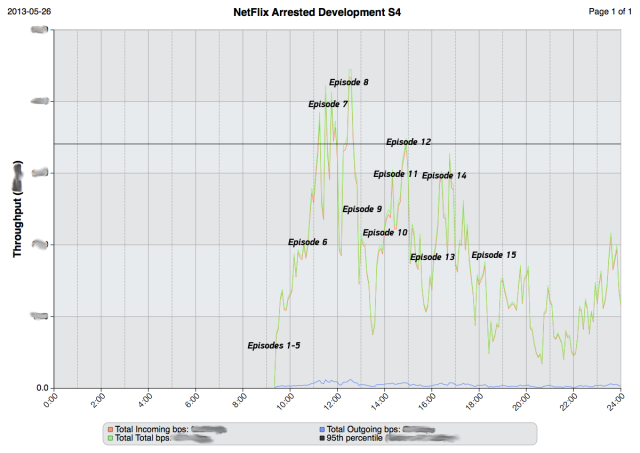 Another cable network saw a jump in Netflix traffic peak at volumes of 10 percent on Sunday compared with the Sunday prior, corresponding with an 8 percent jump in the number of subscribers accessing Netflix overall. Even though it was a holiday weekend, and a traffic jump could be expected, a large portion of that was due to the show’s debut, Procera says.

On one university’s network in the U.S., “Arrested Development” accounted for 10 percent of Netflix’s traffic. File-sharing activity around the show also increased, despite the show only appearing on a streaming-only, DRM’ed connection. 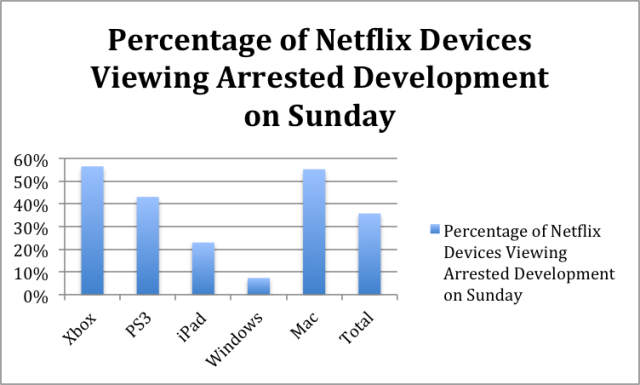 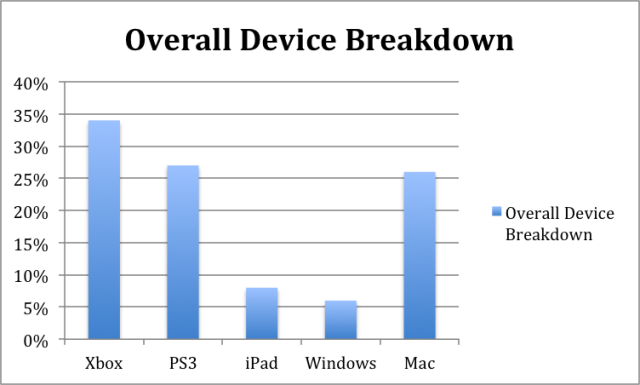 But tuning in for a stream and actually enjoying the final product are two different things.

The closest analogy to what may be happening here is having a much-anticipated new show with big stars debut to strong premiere numbers on traditional TV, but then taper off in following weeks. It’s harder to tell whether the new “Arrested” is an immediate flop, however, because the initial streaming figures are good and all episodes are available at once.

But anecdotally, we’ve been hearing the show was just OK at best. Critics – the group who once lauded the program’s originality and humor – found the new season lacking. The Wall St. Journal commented, “At its worst, the new/old Arrested Development is reduced to doing a shaky imitation of itself: the characters and themes are there but the beats are slightly off, as is the tone.”

The New York Times goes even further, saying, “Chalk one up for the Internet: It has killed ‘Arrested Development,’” and “it’s hard to imagine being anything but disappointed with this new rendition.”

Meanwhile, another storm is brewing on Netflix’s Get Satisfication consumer support site. Parents are losing their minds, as their iPad babysitter fails to deliver the shows their kids are demanding to watch, including big-name children’s brands like “Dora the Explorer,” “Go Diego Go,” “Blue’s Clues” and “SpongeBob Squarepants,” for example.

For those of you without young children, let me paint a picture of what it feels like to suddenly discover these shows are missing.

Close to a meltdown, you grab your iPad, type “D-I-E-G-O” in the Netflix search box, and see a message that reads, “your search did not have any results.”

And then you start to cry. 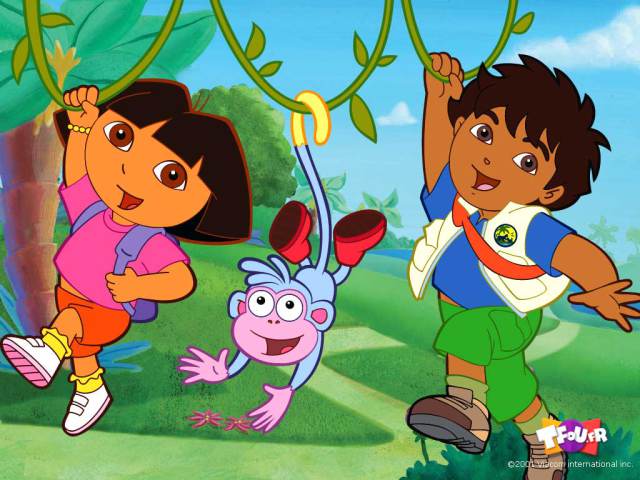 Apparently buoyed by the success of “House of Cards,” Netflix announced it would let its Viacom deal expire this month, as it attempts to negotiate licenses to select Viacom programs à la carte. (Likely this includes the missing shows causing parents’ ire, but the two companies are playing hardball here).

In the meantime, Amazon Prime has the missing Viacom fare, and as PaidContent points out in a post about the enraged comments its earlier reporting saw, several of these shows are now in the top 10 most popular shows streaming on Prime today. Whether viewers will drop Netflix in favor of Amazon Instant Video, is of course, still unknown.

But if “Arrested Development” isn’t worth the viewing, the kids are all watching Amazon, the latest releases are in the Redbox kiosk, and the quality TV is on HBO, Netflix is taking a big risk in dropping some of its most in-demand content as a negotiating tactic. It squandered user goodwill once with “Qwikster,” then fought its way back.

As one parent comments, “I am really tired of Netflix and all of its shenanigans over the years. Don’t you people care what the customers what?”

The same thing might be said by the former “Arrested Development” fans out there.