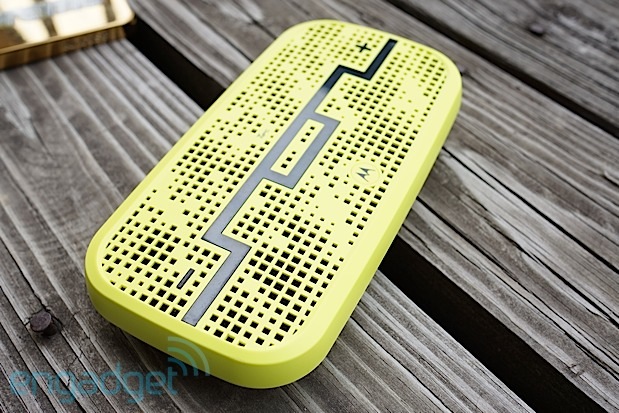 Remember that SOL Republic Bluetooth speaker that made a sneak appearance at Verizon’s Droid event? Well, it’s actually official now and the company wants to ensure its first foray into audio outside headphones is a success. Dubbed the Deck, the speaker is the result of a team-up between SOL and Motorola, with SOL providing its audio know-how and Motorola handling the wireless connectivity bit. The $200 speaker features a flat design that might fit into a pants pocket. Vertically positioned drivers and a side-facing port provide 360-degree sound, and an outdoor mode boosts the highs and cuts the lows if you need to fill open areas with sound.

Additionally, deck boasts a usable range of 300 feet, a sprawling distance compared to the the usual 30-foot line-of-sight limit you’ll encounter on devices like the Beats Pill and Jawbone Jambox. Its Heist setting lets up to five devices connect without needing to enable a pairing mode and, like the name suggests, any user can steal the speaker by hitting play on their device. Rounding things out, you can expect roughly 10 hours of battery life, water-resistance (via a sonically-transparent bag), speakerphone functionality and a 3.5mm input / output. Interested? It costs $200 and is up for pre-order today in yellow, blue, red and “gunmetal.” Shipments are expected to begin before August is over. In the meantime, you can join us after the break for our initial impressions. 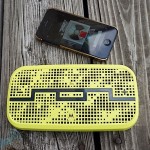 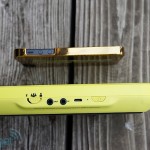 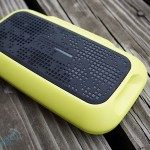 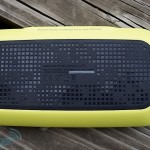 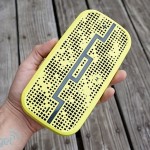 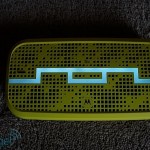 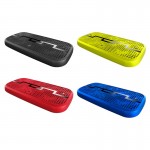 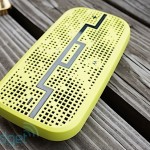 We love the shape of the deck, even though we’re not exactly sold on the yellow color of our prototype unit. While similarly priced speakers are smaller all around, this one simply fit less awkwardly in our pants (including the skinny ones), hoodies and backpack pockets. Heist mode worked seamlessy between our iPhone, Lumia 900 and MacBook Pro, each pairing quickly with mostly interruption-free connections. Better yet, every device gets assigned its own LED color in the mode so you know who hit play, but speakerphone functionality gets axed. Voice prompts are onboard to alert you to battery life and pairing modes, though we’re hoping there will be a way to disable them in the future — lights are simply less bothersome at times.

Getting into the sound quality, we dig the bassy and loud voicing that SOL put into this speaker. That said, a company rep let us know that the sound is indicative of the final production models, but we could see a few tweaks before these hit shelves. Outdoor mode isn’t as full, but the treble boost does make it easier to hear in areas with more sonic pollution. As far as that all over sound goes, the unit is actually a stereo speaker with the drivers slanted slightly opposite of each other. The effect worked well, especially with Deck at the center of a room or a table.

Our main concern for now lies with the low end reproduction: the bass driver had some issues reproducing the lowest points of some EDM and rap tracks along with not sounding terribly accurate at moments. Sadly, the rubber foot also didn’t help the unit from slowly spinning it self around during extra low bass drops. Distortion at high volumes was minimal and no worse than what we’ve come to expect from this type of kit. However, the speakers did sound a bit scratchy on certain tracks. Overall, Deck may prove to be an intriguing little speaker if the final shipping units end up with some tighter bass and slightly cleaner treble output from the drivers.