Let’s not kid ourselves: We don’t control the Internet, the Internet controls us. Any notions to the contrary are foolish at best, but a new Kickstarter project called Circle wants to help families fight back against the Internet’s omnipresence with hardware and software that allows individual control of devices connected to a local network.

Circle isn’t a router, like the Skydog, which was created by the Xerox PARC company PowerCloud Systems and is based on a similar concept. Instead, it’s a network device that can communicate with your router, and with all of your connected devices, offering up a filter between your existing gear and the unfiltered Internet, allowing you to set limitations for kids’ devices based on age, time, ad content and more. You can receive notifications about different types of Internet activity to your own device, too, and get reports about both “negative” and “positive” browsing, Circle claims.

In other words, Circle makes you the NSA PRISM program for your own household, but with a little bit of China’s Great Firewall thrown in the mix. You can schedule timed access to different categories of site, so that Facebook or YouTube time doesn’t get crazy, cut off access temporarily via Pause mode, turn off access once it’s time for bed, and even block ads entirely on devices that your kids use. All of this is managed via an app for iPhone.

Circle says their solution is better because it doesn’t require setting up user profiles or installing nanny software on every individual device, and because it works with your existing router, you don’t need to get an expensive replacement or change any network settings. 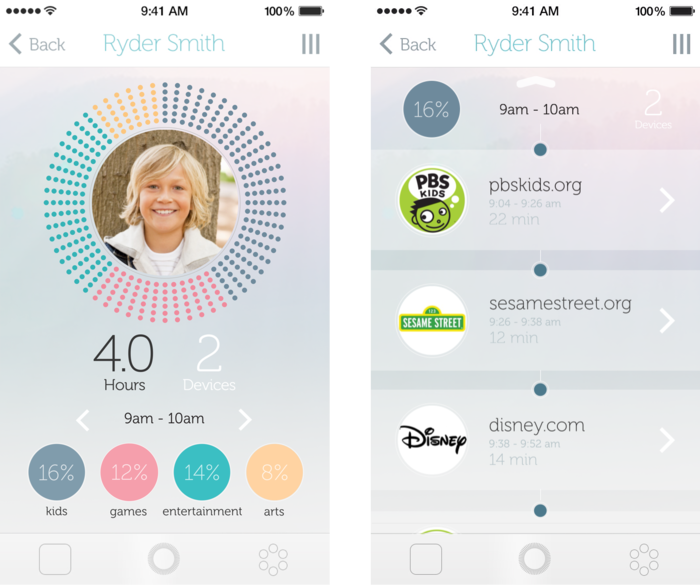 The team behind Circle includes Tiebing Zhang, a former network security engineer for the Department of Defense, and Honeywell Wi-Fi control systems engineer, as well as Jelani Memory, an entrepreneur with experience in design, sports, business development and much more besides. Circle definitely manages to look the part, thanks possibly to founder and Product Designer Sean Kelly, but whether it can back up those good looks with performance remains to be seen.

Circle is $150 to pre-order via Kickstarter pledge, with an anticipated delivery date of August, 2014. Nice to see a hardware startup give itself a reasonable amount of time to deliver. The startup is also looking for roughly $250,000 in total funds to make the project work, which will take the working prototype that currently exists and make it production-ready.