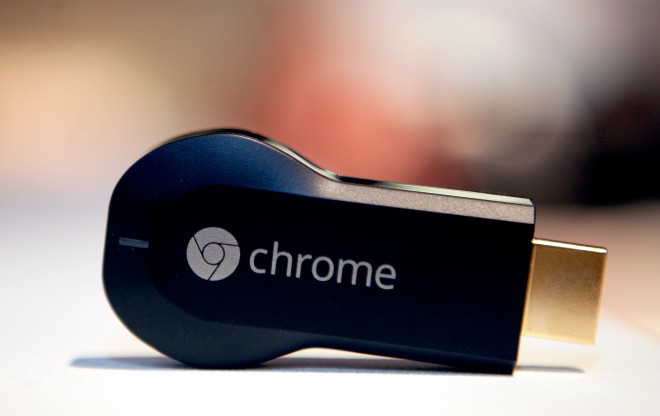 At an event where everyone was expecting a new Android tablet ( and got one) Google announced something far more interesting and important: The Chromecast, a small stick that jacks into the back of your television via HDMI and allows you to sling content via Wi-Fi from your phone, tablet or computer to the big screen. It costs $35, and comes with three months of free Netflix (even for existing subscribers), which means it effectively costs $11 plus shipping. On paper at least, it’s the best device Google has ever announced.

Chromecast is delightfully cross-platform. It works with Android and iOS phones and tablets, Chromebooks, and the Chrome browser for Mac and Windows. The original device controls playback–so if you want to turn up the volume on your TV, simply turn up the volume on your phone. Any program that uses the Googlecast SDK can send content–Google specifically mentioned Netflix and YouTube, and says Pandora is on the way. The Chrome browser itself can also sling content via “Chrome tab projection.”

That last point is huge. It means no matter what the web video or audio source (with the exception of Silverlight and Quicktime video) you should be able to play it on your TV if it plays in your desktop browser tab. That opens the door to web-based entertainment options right out of the gate without having to wait for the developers to take advantage of Google’s SDK. Google confirmed to WIRED that you could run Hulu, Rdio, and HBO Go right out of the gate. You can project your Flickr photos, your web-based presentations, really just about anything that runs in the browser. (Like, say, porn. As one WIRED staffer put it, “this is the pornslinger.”) That’s pretty amazing.

There have been a few other solutions that try to pull something similar off like Apple’s AirPlay and Roku’s Streaming Stick. But both of those have required you to buy a $100 device to connect to your TV. Nothing else has been so device independent, cross platform and, well, cheap.

Google’s had some flops in the living room–Google TV hasn’t ever caught fire, and the Nexus Q has been a total disaster. And of course the Chromecast still could flop too. But at its price point, especially when you factor in the Netflix rebate, I suspect people will tend to be forgiving of quirks as long as it works. And if it does work well–not just acceptably but actually well–it’s going to be in lots and lots of homes. Especially if, as you might imagine, manufacturers begin putting Googlecast technology into new television sets.

Did Google just win the living room? No. But it definitely just cozied up on a lot of couches and got comfortable.

Update: After a quick hands-on, we (quickly!) found that the Chromecast experience is awful if you don’t have a solid WiFi connection. (For a sense of how bad the wifi was in the room where we were testing, it took close to a minute just to get Google results for “free Simpsons video.”) Got a lousy router? You’d better beware.