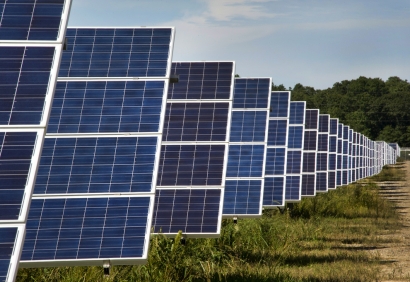 As the market potential and popularity of community solar grows nationally, all eyes are on Minnesota and Xcel Energy’s Solar Rewards Community program. Why are so few projects up and running? How realistic and viable is the 800-megawatt queue? Is the program durable? At the two-year anniversary of Xcel Energy’s community solar program launch, we’re taking a deep dive on the health of the program today and its potential going forward.

First, the good: In the two years since Xcel launched its community solar program in Minnesota more than 2,000 garden applications have been submitted. The bad? Only four applications, totaling 400 kilowatts, are interconnected and producing power today.

At this time last year, stakeholders felt cautiously optimistic. The initial, arguably unexpected, cohort of applications which had created a bottleneck within Xcel’s administrative and engineering staff seemed to have come unstuck and started moving forward. Additionally, after disagreement and controversy over project co-location, in June 2015 the Public Utilities Commission came to a decision to cap existing co-located projects at 5 megawatts and temporarily limit new applications to 1 megawatt.

One year ago, with uncertainty about whether or not the 30 percent federal Investment Tax Credit would be renewed, stakeholders were ready to forget the bumpy program launch and focus on expediency through the final interconnection stages. Xcel was seemingly on board, predicting that they would approve projects “north of 250 megawatts” by the end of 2016.

But, as we near the end of 2016, Xcel is now predicting a fraction of that number — 55 megawatts — will be energized by year’s end. According to Xcel’s latest compliance report filed this month:

“To date, several delays have prevented previously scheduled in-service dates from occurring, including safety concerns due to insufficient grounding, solar-garden readiness, solar-garden equipment failures during testing, and other unspecified requests to move dates. Xcel is working to accommodate shifting schedules whenever possible for year-end completion, but timelines and crew availability [are] very tight at this time of year, and weather-related impacts are possible.”

What is the status of the 800-megawatt application queue?

Today’s interconnection queue is primarily composed of applications submitted well over a year ago, the majority of which are co-located gardens between 1 megawatt and 5 megawatts in size. The chart below shows the monthly progression of these applications over the last calendar year from the Early Application Stage (blue), through the Engineering Study Stage (red), into the Design & Construction Stage (green) and finally to a complete application and in service project (sliver of purple). 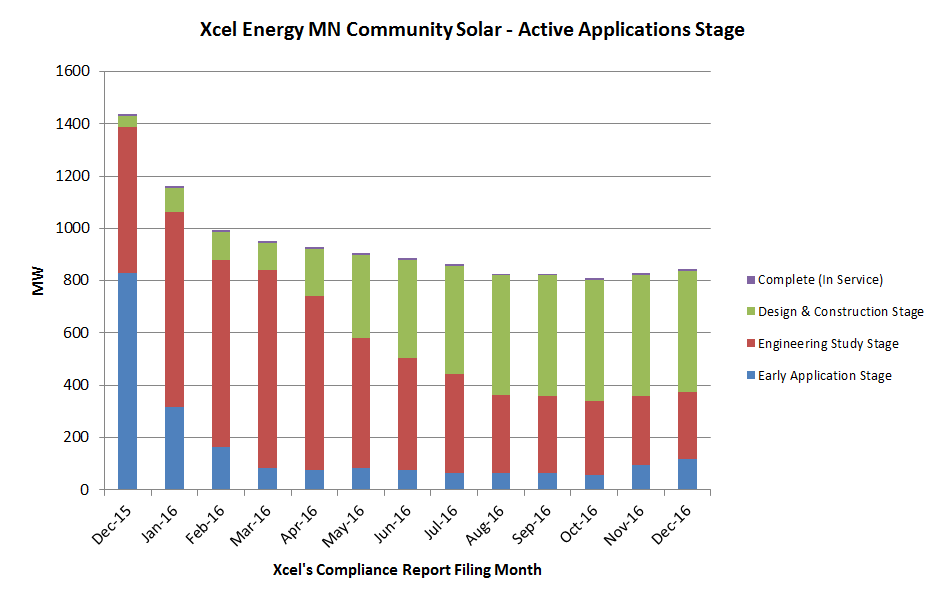 The first trend this chart shows is that projects are moving through the process, albeit slowly. Xcel’s latest compliance filing reports 178 megawatts across 49 project sites in the “construction phase,” and we expect many of those in-service dates are nearing.

The second trend is that the overall number of applications is generally declining as projects are canceled or downsized. We attribute this at least in part to:

Unexpectedly high costs to interconnect revealed upon completion of the engineering study.
First-in-queue applicants moving forward claiming existing interconnection capacity leaving those projects next in line without a viable. economical path to completion.
Reasons unrelated to interconnection such as permitting authority disapproval, financing difficulties, easement challenges, etc.
Additionally, there have been 12 formal interconnection disputes filed by solar companies challenging Xcel’s methodology and/or study conclusions. In the dispute process, an independent engineer contracting with the state’s Department of Commerce reviews the complaint history and prepares a thorough report and recommended resolution. Most often the reports have then been appealed by one or both parties and escalated to the commission for final decision. These disagreements have contributed to project delay, not only for the disputed projects but for others in the queue that have opted to be placed on hold in anticipation of a precedent-setting resolution.

The third trend is that new application volume has declined significantly since the deadline to submit co-located projects up to 5 megawatts lapsed in September 2015, as illustrated by the chart below. When the temporary 1-megawatt cap was reconsidered by the commission in July 2016, it reached the same conclusion and the co-location cap of 1 megawatt remains in place going forward.

Finally, a national policy milestone was reached when the commission approved the value-of-solar (VOS) rate as the bill credit for Xcel’s solar garden program. While Minnesota’s VOS methodology has been in place since 2014, this is the first time it will be put into practice in Minnesota and the country. All existing applications are grandfathered in under the “applicable retail rate” (ARR), and new applications filed on or after January 1, 2017 will receive the VOS rate. The small uptick of new application volume in the last few months, as seen in the above chart, is likely made up of projects developed with the ARR bill credit in mind submitting prior to the year-end deadline.

More work to be done

Engineering studies and designs are being completed, city and county permitting hurdles are being cleared, patient customers are signing up as subscribers to the program, and garden construction is underway across the state. Locally hired laborers and electricians have enjoyed a long building season as temperatures remained mild through November. And because the extension of the federal tax credit took some pressure off of the firm end-of-2016 deadline, it is looking likely that we will have our first 100 megawatts of community solar energized within the first few months of 2017. Minnesota’s flagship CSG program with Xcel is still a national leader and is still poised to be the largest in the country — at least for the next year or two.

But it is critical that we continue the program momentum and stability to ensure the ongoing health and growth of the Minnesota solar market. To that end, Fresh Energy will be participating in three upcoming discussions.

1. VOS plus an adjusted bill-credit rate

Between now and March 1, the Department of Commerce has been tasked with consideration of whether the VOS bill-credit rate should be adjusted with a positive or negative adder that could help to either encourage or discourage things like residential subscribers, low-income residential subscribers, brownfield sites, rooftop locations, etc. The Department of Commerce will file its recommendations with the Public Utilities Commission and stakeholders this spring.

Improvements to Xcel’s interconnection process have been made in the last two years for community solar applications, yet outdated state rules continue to be challenged by this large pipeline of projects and the technical engineering disputes that have arisen. The commission and stakeholders recognize that the 12-year-old interconnection rules are insufficient, and Fresh Energy and our partners initiated a new docket to facilitate the adoption of national best practices for all projects moving forward.

The last two years have been, at times, a bit discouraging. But because of all the legwork and regulatory improvements, Xcel’s community solar program has unquestionably been a significant driver for investment and access in the state’s solar market. As the initial pioneering projects are commissioned, the utility and developers will benefit from the hard-earned postmortem learnings that will result in accelerated timelines and lower project costs. Looking ahead to year three, we’re optimistic that the program will find a more stable and healthy rhythm.