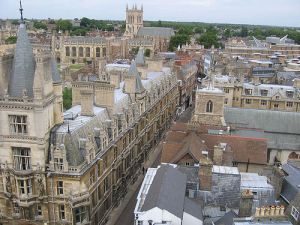 There’s a bit more money sloshing around the U.K.’s high tech Cambridge cluster, thanks to a new fund that’s just been set up. The Cambridge Innovation Capital (CIC) fund has launched with an initial £50 million to invest, and a remit to help tech companies and startups focus on developing their ideas and technology — rather than having to divert energy to worrying about raising funding, accelerating revenue creation or flipping the business to please ROI-hungry investors.

“CIC plans to invest the £50m over the next three years, and hopes to make its first investments by the end of the year,” a spokeswoman for Cambridge University’s commercialisation arm, Cambridge Enterprise, which will support the fund, told TechCrunch.

A release announcing the fund’s launch notes that it will provide “long-term finance that will help companies bridge the critical middle stage of commercial development, the so-called ‘valley of death’”. ”CIC will invest in a broad range of companies at different stages in their development, using a long-term return strategy — removing the pressure to deliver the early exits associated with the traditional venture capital model,” it adds.

The spokeswoman pegged this “longer-term investment horizon” at between seven and 15 years. She also confirmed CIC will have a broad remit to support technology companies from within the Cambridge Cluster, not just spin-outs based on Cambridge University research. Ergo, the fund may help to attract more high-tech startups to an area that’s already a hub for such activity.

Cambridge is home to plenty of high-tech businesses, fuelled by the proximity to a world-class engineering- and science-focused university (and the skilled graduates it turns out) — as well as proximity to other tech companies, such as ARM, the most high-profile homegrown Cambridge Cluster resident. The Raspberry Pi low-cost microcomputer is another notable made-in-Cambridge tech success story. The city has also attracted global tech giants, such as Microsoft and Nokia, which have established research labs there. While, earlier this year, a £25 million graphene R&D centre was announced for Cambridge — with backing from the University and a range of tech industry players.

“In the last 50 years the Cambridge area has seen significant expansion and is now home to 19 science and business parks, 1,500 technology-based firms, and employs more than 54,000 people,” CIC notes on its website.

The CIC fund will mostly be focusing on injecting capital, although the Cambridge Enterprise spokeswoman said it will look to appoint at least one director to each company it invests in to “monitor/contribute in that capacity”. The majority of mentoring and advice is likely to come via Cambridge Enterprise, she added.

The CIC fund is a partnership between Cambridge University and a series of outside investors, with Invesco Perpetual and Lansdowne Partners as lead investors. The University’s Endowment Fund is also putting in capital, and Cambridge-based microprocessor designer ARM Holdings and IP Group is another investor.

ARM’s CTO Mike Muller, is on the CIC board, along with Edward Benthall, a former partner at Charterhouse Capital Partners; and Cambridge Enterprise Chief Executive, Dr Tony Raven. The CIC management team is being led by entrepreneur and co-founder of Merlin Biosciences, Peter Keen.

“Many good companies have to spend too much time fundraising, leaving them with less time to focus on running their business,” said Edward Benthall, CIC’s Non-Executive Chairman in a statement. “CIC will work with angel and other long-term investors to bring innovative technologies to market and help build world-class businesses.”