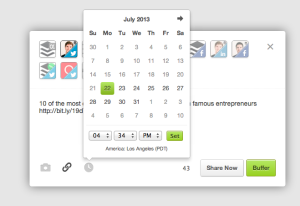 Buffer launched 2.5 years ago will a simple but clever idea: an app that makes it easy to automatically schedule social media updates so that they are not only spread throughout the day — thus reducing noise — but will be published at the most optimum times, increasingly the likelihood that they’ll actually be seen.

It was an idea that caught on, seeing the startup go from 1,000 users in its first three and half months to an impressive 850,000 users today. That’s up from 600,000 users in April. And while not all of those are paying customers, Buffer says its now seeing more than $1.5 million in annual revenue. That’s pretty good going.

However, despite plenty of demand from users, one feature that the startup has resisted adding is custom scheduling; the ability to manually program when those buffered social media updates — Twitter, Facebook or Linkedin — will go live.

Until today that is.

The inability to custom schedule update, and instead focus on algorithmic/automatic scheduling, was what originally set Buffer apart from its competitors in the social media management space, while it also ensured that the product remained simple. That’s all and well and good, and it’s hard to argue that it wasn’t the right decision, but it also meant Buffer didn’t cater for the various use cases where manual scheduling might be required.

“You might be working on a marketing campaign, there is an event or launch coming up, you want to schedule a nice message for your friend’s birthday. Those are just a few of the amazing use cases people have been telling us about,” says the company, rather breathlessly, in a statement.

The way custom scheduling works is pretty simple. Whether you’re buffering your social media updates via the Buffer browser extension, Buffer website, Android app, and soon Buffer’s iOS app (once the update reaches the App Store), you simply hit the schedule icon and select the date and time from a mini-calendar and accompanying pull-down menu.

Custom scheduled updates are differentiated from regular buffered updates with a grey background for their timing. 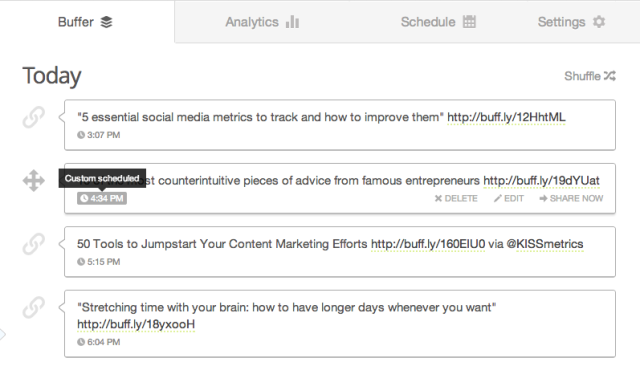