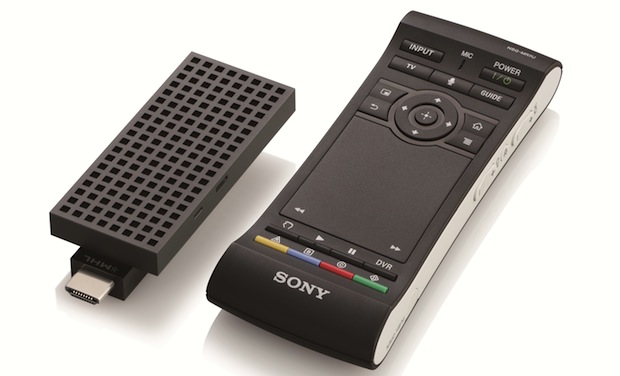 After appearances in early FCC leaks and a quick preview this weekend, Sony has officially announced its next Google TV device, the BRAVIA Smart Stick. We already knew the MHL and USB connected dongle would only work with Sony’s 2013 or later HDTVs, and its functionally similar to the company’s previous Google TV boxes so what’s left? Sony has revealed that the NSZ-GU1 carries a $149.99 pricetag and a bit more about the product’s strategy. This stick doesn’t replace the TV’s built-in smart features, the UI is built so it “seamlessly integrates Google and Sony’s own BRAVIA apps, allowing viewers to stay in a single menu to launch any of their apps.” That also means owners don’t have to switch inputs to access live TV thanks to the HDMI passthrough, and should offer quick access to BRAVIA apps not on Google TV like Hulu Plus. The downside? Its limited compatibility means it’s no Apple TV or Roku alternative, and until software updates arrive it’s not a replacement for Google’s popular and cheap Chromecast HDMI dongle. If you have / plan to buy a new Sony HDTV and are interested in living the GTV lifestyle, you should find it at Sony Stores and “select retailers”, although we couldn’t locate one online (yet) after a brief search.