Mark Zuckerberg: ‘We Want to Create a Dial Tone for the Internet’
Ex-Apple Engineer Launches Moov, The Next Generation Of Wearable Fitness Tracking 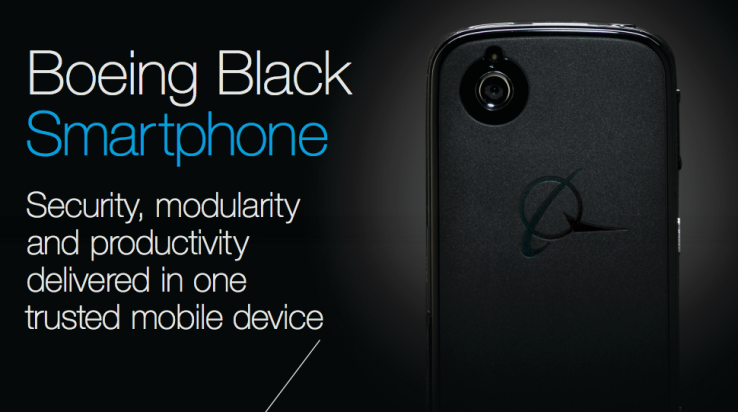 Boeing’s secure smartphone has been fully detailed after an FCC filing revealed its imminent arrival yesterday, and the Android device seems like an unusual, and mission-specific gadget. With a 4.3-inch 960×540 display, LTE, a dual-core 1.2 GHz ARM Cortex A9 processor, Bluetooth 2.1 and SD expandability, it’s not going toe-to-toe with any flagship devices, but the point is security, not muscle.

Boeing told Reuters that it has been working on the Black for three years, and that the phone has now been offered up for sale to the aerospace company’s very select clientele (ordinary humans like us don’t get price or general availability information). Information about OEM partners manufacturing hardware, or networks offering service for the device are classified, as is much about the smartphone by design, since it’s entirely based around the idea that some customers need a smartphone where security features are not only present, but paramount.In working with Boeing’s U.S. defense and security clients, the company realized that there was a need for devices that are designed from the ground up for the protection of sensitive data and transmissions. The Black is that, and offers a modified version of Android with additional built-in security features to accomplish that. A dual-SIM feature allows it to switch easily between general consumer and government-specific networks, and it features a modular design via a hardware expansion port.

This expansion port allows clients to add in various tech security devices, including biometric sensors for verifying identity, as well as add-ons that provide additional powers to the phone, like satellite antennas for remote connections, backup batteries or protective cases. There’s also a PDMI port, which can be used to connect to media devices and in-car systems.

It might seem like an odd device for Boeing to market, since it isn’t a jet or satellite, but the company actually has a great position from which to market the next generation of secure mobile devices, because of the nature of its client list. It also probably has a unique perspective on what those clients need in terms of secure communications capabilities. It’s early days for the Black project, but it’ll be interesting to see if this can encroach on BlackBerry’s dominant role in the U.S. Defense market.