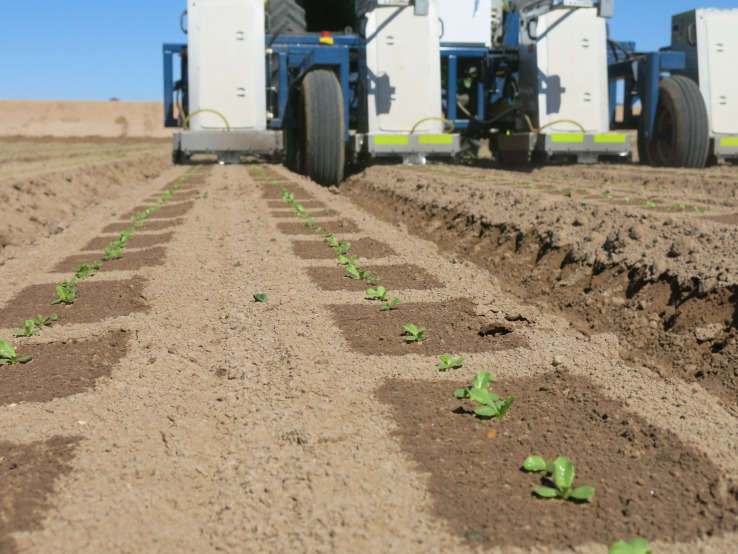 Blue River Technology, which uses robotics and computer vision to optimize agriculture by, for instance, determining which lettuces to thin out of a row and which to keep, has closed a $10 million Series A-1 funding round, led by Data Collective Venture Capital — topping up a $3.1 million Series A it raised back in 2012.

Blue River Technology’s main premise is to reduce the use of chemicals in food production by optimizing agricultural methods via robotics systems that can automatically recognize plants and make decisions about which seedlings to thin or identify weeds to eliminate.

The idea is to enable large-scale farms to tend to the needs of individual plants vs the broadcast methods employed by current generation agriculture — which relies on spraying pesticide en masse, because, well, chemicals are dirt cheap. Yet problems with environmental or even food contamination are not factored in to current farming methods, and that’s something Blue River is hoping to change.

CEO and co-founder, Jorge Heraud, told TechCrunch: “Traditional agriculture is very chemical intensive. Chemicals are broadcast applied — a field of many acres, many hectares, gets the same treatment. All plants get fertilized in the same way, all plants get treated with chemical herbicide whether they have weeds or not. Or they get pesticides whether they are sick or not. Everything is just treated the same way.

“The future I see is a future where we use half, a fifth, a tenth of those chemicals by just understanding and putting herbicides only on the plants that need them, by putting fertilization only in the quantities that you need them, putting disease control chemical only on the plants that need it. This can means just a phenomenal amount of savings and efficiency increase and yield increase… We’re calling it ‘making every plant count’.”

Blue River Technology’s first product — currently being used by some eight customers in different parts of the U.S. (and bringing in revenue for the startup) — is designed to precision thin lettuce crops by allowing farmers to set the required spacing between plants. The machine then targets herbicide spray to remove only the plants that aren’t wanted.

Typically this work would usually be done by human thinners — so in this instance Blue River Technology isn’t necessarily reducing chemicals used. But that’s part of its strategy to overcoming the agricultural industry’s over-reliance on herbicides and pesticides generally.

Heraud said the biggest barrier to uptake of robotics optimized agriculture is the low cost (to agriculture) of using chemicals. That’s why it’s started by focusing on specific areas where costs are higher — such as the aforementioned lettuce thinning (being as it’s usually done by human workers who are more expensive to employ than mass spraying).

By targeting its tech at areas that aren’t currently optimised by automation, Blue River hopes to expand into areas that are — and help reduce the chemical load being sprayed onto fields in the process.

“If you’re competing against chemicals right now, or big pieces of automation, it’s pretty hard; the costs are pretty low,” said Heraud. Ergo, the initial strategy to build traction in the agricultural industry is “getting good at the bits where chemicals are not being effective yet”.

Other areas Blue River hopes to target next are portions of agriculture where herbicides have been over-used and led to problems with herbicide-resistant weeds — which in turn requires farmers to use more expensive chemicals to kill them. That makes a precision targeting technological solution potentially more attractive, argues Heraud.

Blue River plans to use its new financing to further expand its engineering team and product offering. Specifically, he said it’s working on improving its lettuce precision thinning machine with a next-gen version of the product in the works that’s wider, faster and more accurate.

It’s also working on extending its plant recognition systems — which is where the computer vision tech comes in — and also on big data techniques for application with row crops such as corn and soybeans, which it said can benefit from phenotyping for crop breeding as well as precise weed control.

Phenotyping refers to the process that seed breeders engage in in propagating plants to produce high quality seed. This is an area where Blue River sees plenty of potential for its technology.

“It’s a very important tool too — if you think about agriculture and how you can have an impact on agriculture… the work that seed breeders do can have one of the largest impacts on food and food worldwide,” he added.

Commenting on Blue River’s funding in a statement, Vinod Khosla said: “Blue River is taking a very innovative and practical approach to solving one of the world’s top problems – how to produce more food in a responsible way. I’m impressed by how quickly the company brought its first product to market, and how successful it’s been. This high-caliber Blue River team has assembled leading experts spanning both cutting-edge technology and agriculture, and they are in a great position to lead the next gen of environmentally-friendly precision agriculture.”

“Blue River is leveraging three important trends: machine learning, data-driven agriculture and robotics,” added Matt Ocko, founding partner of Data Collective Venture Capital, in a second supporting statement. “This approach has the potential to revolutionize how we produce food in the near future.”