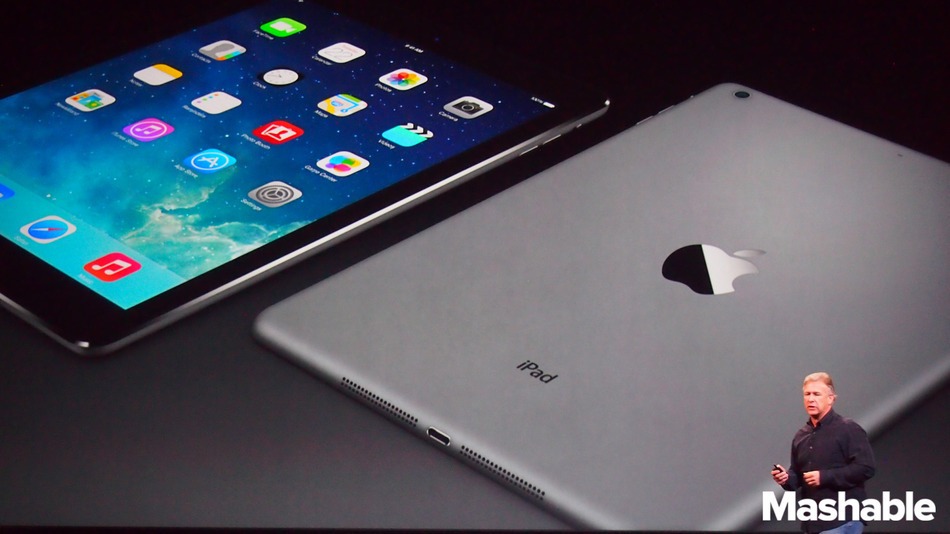 Apple unveiled the fifth generation of the iPad on Tuesday at an event in San Francisco, called the iPad Air. The new model sports a thinner design and a 64-bit processor, a feature first seen in the iPhone 5S.

The physical design is lighter and thinner. Where the previous iPad was 1.4 pounds, the iPad Air weighs just 1 pound. The thickness drops about 20% — from 9.4 millimeters to 7.5mm (0.30 inch). The bezel surrounding the screen is thinner, too, shrinking by 43% and closer in proportion to the bezel on the iPad mini. Apple says the iPad Air is the lightest “full-size” tablet in the world.

The iPad Air’s 9.7-inch screen has a pixel resolution the same as before, at 2,048 x 1,536. The chip inside is the same as the one in the iPhone 5S, the 64-bit A7. Apple says the performance is double that of the previous generation. Compared to the first iPad, the iPad Air has 8x the performance and 72x better performance on graphics. The iPad Air also packs the M7 motion coprocessor that pulls data from the device’s accelerometer, gyroscope and compass.

Thanks to dual antennas an MIMO (multiple-input multiple-output) technology, Apple says the iPad Air is twice as fast as the iPad 4 on Wi-Fi networks, and it supports 802.11n/g/b/a standards, but not the new standard of 802.11ac. The rear camera is 5 megapixels, same as the iPad 4. The 32.4-watt-hour battery is rated at 10 hours.

The pricing is the same as previous iPads, starting at $499 for 16GB, available in white with a silver back and black with a “space gray” back. Capacity can go all the way up to 128GB for $799. The iPad 4 will be discontinued, but Apple is keeping the two-year-old iPad 2 in its lineup, starting at $399 for 16GB.

The iPad Air will go on sale worldwide, including in China, on Friday, Nov. 1. It includes more support for LTE networks, and Apple will offer a version through T-Mobile, completing the iPad’s availability on all four major U.S. carriers.

The new physical design required Apple to revamp the iPad’s Smart Cover. The new cover has hinges built to exactly match the curve of the iPad Air, and the overall shape is different, folding into three sections (instead of four) to create a triangular stand. There’s a new Smart Case — which holds the iPad in pouch — as well. Pricing on the two products remains the same, starting at $39 and $49.

Rumors and leaks have surrounded the fifth-generation iPad ever since the previous generation arrived about a year ago. The iPhone 5S provided many clues about the direction Apple was heading with its mobile products, such as the inclusion of the 64-bit chip. A physical redesign had been predicted as well.

The iPad Air arrives at a time when Apple’s tablet ecosystem has never been stronger. The iOS App Store recently passed 1 million apps and shows no signs of slowing down. Apple says 475,000 of those apps are designed specifically for iPad — far more tablet apps than any other platform offers.

Correction: This article initially reported that the iPad Air supports 802.11ac Wi-Fi. It does not — the most recent standard supported is 802.11n.