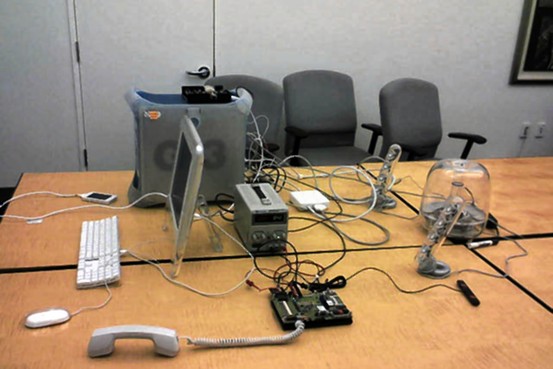 Offering a rare interview in the run-up to another legal fray between Samsung and Apple, the senior engineer behind the iPhone has explained where it all started, part of Apple’s plan to communicate how groundbreaking the original iPhone was. Talking to the WSJ, Greg Christie explained how the secret project, Purple, brought the iPhone to life. At some point, the former Apple boss told him straight: the team had two weeks, or he would assign the project elsewhere. “Steve had pretty much had it… He wanted bigger ideas and bigger concepts.” In the end, the “shockingly small” team had outlined a touchscreen phone with swipe-to-unlock, no physical keyboard and all the music-playing features of the company’s iPod series. They ran early software tests on a plastic touchscreen, hooked up to a dated desktop Mac [seen above] — an effort to emulate a low-powered mobile processor.
Christie had to make twice-a-month presentations directly to Steve Jobs, and once it was decided that this was going to be something real, apparently that’s when the real work began. A “two and a half year marathon” where Jobs obsessed over every detail. In the six months between revealing the iPhone and it going on sale, the changes didn’t stop, with a split-screen view for email showing both the message and sender information scrapped before launch. “Steve thought it was foolish to do a split screen on such a small display.”