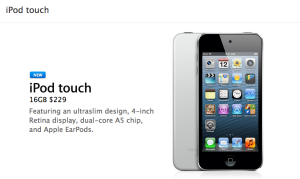 Apple today dropped a mid-cycle refresh of the iPod touch, its iOS-based iPod, with 16GB of storage on board and without a rear camera, for $229. This slots in its existing lineup between the refreshed, fifth-generation iPod touch, which has a rear camera (and a loop for attaching a wristband), and the iPod nano.

The new iPod still has the same 4-inch Retina display you’ll find on the existing iPod touch and the iPhone, but it only comes in one color, black and silver, and it replaces the 16GB fourth generation leftover which Apple had offered since introducing the fifth-generation touch, presumably to fill the price gap between it and the 32GB $299 model of that lineup. The fourth gen models had been available for $199 for 16GB, and $249 for 32 GB, so this threads the needle between those two options in terms of price point.

You’ll still get the front-facing FaceTime camera, with 720p HD video recording on this device, the same A5 processor, and the same battery life. The new iPod touch variant is actually .06 ounces lighter than the existing versions, however, which is probably the weight of the rear camera module component. It also boasts the same Bluetooth 4.0 and Wi-Fi capabilities as the fifth-gen device.

As MacRumors points out, this refresh was actually predicted by KGI Securities’ analyst Ming-Chi Kuo, who has an impressive track record on products so far, though he also predicted an 8GB model, too. Still, the fact that he nailed the lack of a camera and the price point on the 16GB model is impressive.

Apple has seemed more open to making changes that go beyond internal specs on products mid-update cycle, including the iMac, which got a VESA-compatible variant earlier this year. I suspect that Apple needed its component and manufacturing costs to get to a point where this version would become viable in terms of its margin expectations, and also that it probably benefitted from clearing the supply lines of the fourth generation model by waiting this long to introduce this variant, but it still might be indicative of a new way Apple is thinking about product releases.