Appfuel is aiming to make it easy for mobile app developers to manage the tradeoff between user growth and monetization.

Cross-promotion between apps is a big part of the ecosystem, but CEO Andrew Boos said Appfuel is unique because of its simplicity. Developers add a “suggested apps” unit to their own apps, and they can either grow their user base by getting a reciprocal recommendation in another app, or they can earn money by running sponsored suggestions — or rather, with Appfuel, they do a mix of both. To adjust the program, they just move a slider determining how much of their inventory goes towards recommendation swapping versus sponsored links, and Appfuel handles the rest of the optimization process.

“The only real decision a developer must make is what percentage goes to each,” Boos said. “We make the ‘grow vs dough’ decision easy.” 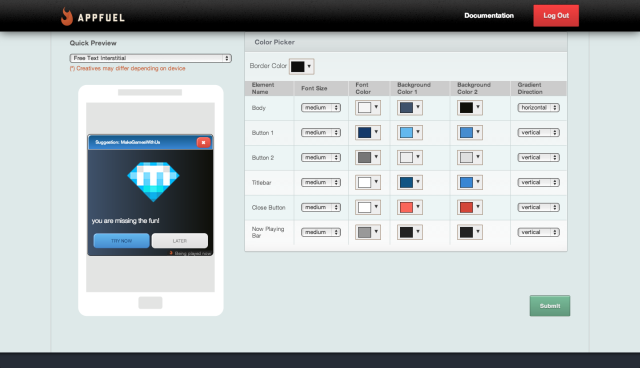 Appfuel also offers real-time analytics and a dashboard that allows developers to monitor all their apps in one place. And there’s a “focus” feature for launching a new app, so that all of the suggestions in all of a developer’s apps can promote the new product.

The startup said it’s already working with mobile game accelerator YetiZen and mobile games startup MakeGamesWith.Us. Starting today, it’s looking for sign-ups for its Founders’ Package, where developers can use Appfuel and keep 100 percent of the revenue (rather than giving a cut to the network) over the next 12 months. The goal, Boos said, is to work with about 20 to 30 apps initially, though Appfuel will be accepting more on an ongoing basis.

The startup has raised a “six-figure” amount of funding from advisors (who include Max Teitelbaum of WhatRunsWhere.com and Jivan Manhas MediaTrust and Internet Media Labs), grants, and accelerators (Chinaccelerator, Boost.vc).