Microsoft announces Surface Pro 2 accessories including a docking station, Power Cover and Type Cover 2
China said to be unblocking sites like Facebook, Twitter and the NYT, but only in a small part of Shanghai 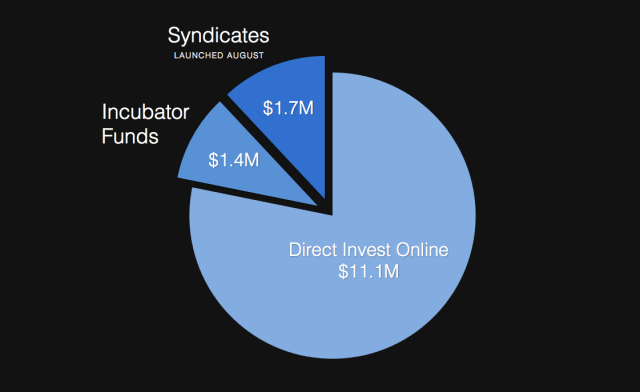 With the loosening of the SEC’s restrictions around general solicitation or public fundraising by startups, AngelList is launching a suite of products that could extend its influence (and its revenue model) in the tech ecosystem today.

Much has been made of how AngelList’s new ‘Syndicates’ program could revolutionize early-stage funding for startups. Regular angels can essentially raise a venture fund on the fly, bring in a group of friends who are accredited investors and provide a startup with an early round of reasonable size. Then the lead angel takes carry from the deal.

This is competitive to the role that more traditional venture firms might play in first-round financing. Since the program was launched last month, more than $1.7 million has been raised through syndicates on AngelList (and the number is now higher with a few more deals in the works).

Today, AngelList is taking that program a step further with “Backers,” a way that angels can round up financing commitments in their network ahead of investing in companies.

It could give angels even more leverage to pledge hundreds of thousands of dollars in seed-stage capital when they take meetings with companies.

Here’s a hypothetical example: an angel can step forward and say they typically invest $25,000 (see the slide below). Then the 10 other angels they typically co-invest with can also pledge a similar amount, giving their syndicate more than 10 times the angel’s original financing power. With syndicates, the lead setting up the deal takes a 5 to 15 percent carry of the investment’s returns. Then the group of investors pays a 5 percent carry to AngelList. 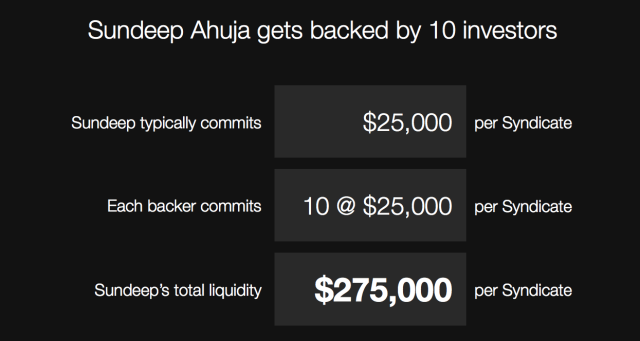 “This creates a very clean signal,” said AngelList co-founder Naval Ravikant. “You’re putting in money at the same valuation as the lead. They’re only being paid in carry and they have skin in the game.”

With syndicates, follow-on investors are basically betting on a lead angel’s judgment in a specific company.

But with backers, they’re betting on the lead angel’s overall investment judgment.

AngelList will launch a syndicates leaderboard soon that will show how much angels are able to pool together from their network for a startup and how much carry they typically ask for.

This could make the seed and Series A market for financing much more competitive and transparent. Ravikant shied away from pointing out any firms or investors that might lose out in this environment, saying, “Anyone whose value-add is not commensurate with what they’re charging or offering is going to find it tougher.”

While some of the AngelList syndicates have raised between $200,000 and $600,000 for their companies so far, it wouldn’t be hard to imagine that AngelList could facilitate much larger deals in a few years’ time.

AngelList is also putting out a host of other products today (not to mention the fact that the company itself picked up $24 million in funding from 116 investors, including Google Ventures and Atlas Ventures). Accelerators will now be able to raise funding on the platform, provided it goes to all companies in their program so that there’s no problem of adverse selection. AngelPad, for example, has raised more than $1 million on the platform for 12 companies. AngelList has attracted 145 accelerators to its platform.

They’re also launching public fundraising on the site today, too, although Ravikant warns startups to be cautious about going down this track.

He says that general solicitation is a distinct legal track. It could create more onerous legal requirements for startups, because they have to do more work to make sure their investors are actually accredited. With the SEC changes today, about 1,800 companies on the platform will be able to raise publicly.

In total, all of these products today create a host of new revenue streams for the company. AngelList said it will charge a 10 percent carry fee for whatever an investment returns if the deal is done directly online through its platform. With backers and syndicates, they’ll charge a slightly lower 5 percent carry. 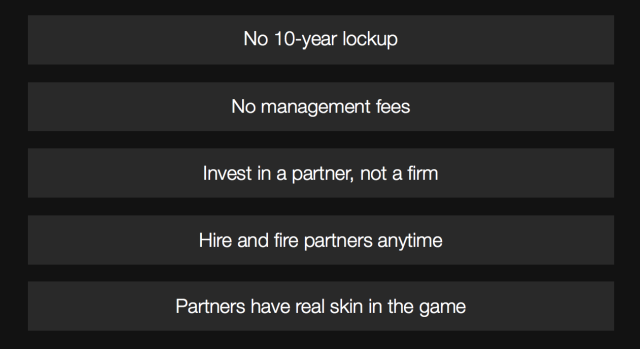