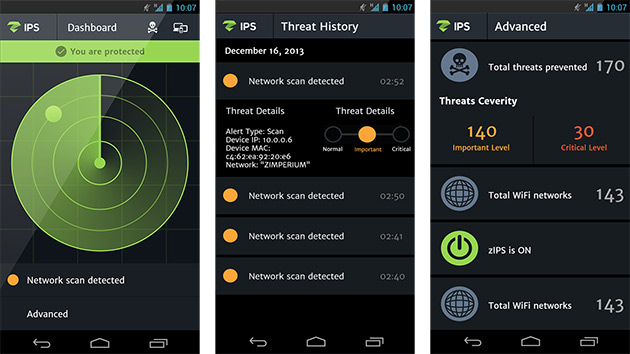 The last time we heard from Itzhak ‘zuk’ Avraham, he was at Defcon 2011 showing off an Android app that let even inexperienced users poke around networks for weak links and vulnerable computers. Now his company, Zimperium, is rolling out a new mobile intrusion protection app (or zIPS, for short) to help users figure out when their phones are subject to sneak attacks.

There’s no shortage of mobile antivirus apps out there, but according to MIT Technology Review Avraham doesn’t think the prevailing approaches are up to snuff. Many of them check downloaded files for known malware signatures, but zIPS’ machine learning system helps it figure out how your smartphone normally works and detects changes that may be symptomatic of something sketchy. That includes detecting seemingly benign apps that later download malicious payloads, man-in-the-middle-attacks and still more mobile nastiness.

Currently zIPS is enterprise-only, but a consumer version is in the works and the team hopes to hit iOS devices and a slew of connected home gadgets in short order.