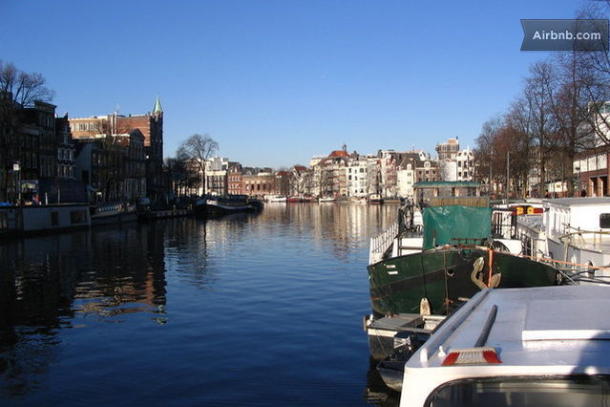 The peer-to-peer housing site once again touts its positive economic impact, but this time in a city that has given it the green light.

Amsterdam recently passed progressive new policies that clarify how guests can legally rent out their homes on Airbnb.
(Credit: Airbnb.com)

Airbnb on Tuesday released another economic impact study — this time for Amsterdam — once again touting that its guests stay longer and spend more.

The company again threw out some big claims and while it didn’t include a total figure for how much money Airbnb brings to the city, the average amounts generated per tourist were slightly above its previous estimates for San Francisco, but below its estimates for Paris.

This latest report, complied by Airbnb, said tourists who rent through Airbnb hosts stay an average of 3.9 nights and spend about $1,059 (792 euros) during their stay, compared to other visitors who spend on average 1.9 nights in Amsterdam and spend about $697 (521 euros). In Airbnb’s prior studies, it found that the average San Francisco Airbnb guest visits for 5.5 days and spends $1,045 and the average Paris Airbnb guest visits for 5.2 nights and spends $1,151.

According to the Amsterdam study, part of the Airbnb guest’s money is spent in local neighborhoods since most Airbnb rentals are outside of tourist area. The company highlighted its “live like a local” approach, with 93 percent of its hosts saying they wanted to use Airbnb to get a more “authentic” experience in the city. As a result, the average Airbnb guest spends $239 (179 euros) at local businesses in the neighborhoods where he or she stays.

Thirty-six percent of Airbnb hosts said the income from rentals supplements their income, according to the study.

“The Airbnb community in Amsterdam helps residents and small businesses benefit from tourism,” Airbnb Public Policy Director Molly Turner said in a statement. “Local residents earn extra money that helps them cover housing costs and living expenses and travelers from around the world have a new, more sustainable and social way to visit one of Europe’s most vibrant cities.”

It’s unclear if the report takes into account any tourism fees or hotel taxes Airbnb hosts don’t contribute to the city. While other cities have targeted Airbnb with concerns of unpaid taxes (it’s difficult for cities to track these self-reported taxes) and a potential loss of residential housing to tourists, the city of Amsterdam has actually changed its policy toward Airbnb rentals. City officials recently clarified its laws, allowing locals to rent out their homes on Airbnb if they follow certain rules.