With $1.2M In Funding, TapCommerce Aims To Bring Ad Retargeting To Smartphones
After Closing $3 Million Series A, Qwaya Wants To Help SMEs Get Down With Facebook Ads 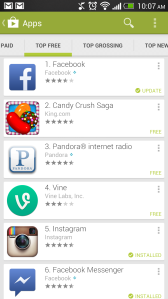 Vine has already clarified just how quickly its userbase is growing, with the announcement that the app had hit 13 million downloads by the time Twitter launched it on Android. This was all just a week ago. Today, however, we’ve learned that Vine has climbed to the top of the charts on Android as the top social app and the No. 4 free app on Google Play. Instagram is No. 5.

For those of you who don’t like smartphones, GIFs or general merriment, Vine is a new app released by Twitter in January of this year. The app works a bit like an Instagram for video, letting you shoot creatively edited, six-second looping videos to share with your friends on social networks, etc.

The app has seen some incredible growth in the short time it’s been available, hitting No. 1 on App Store charts in just a matter of days. A week later, we learned that Vine had already grown to be about twice as popular as SocialCam and other competing video-sharing apps.

The team has been iterating ever since, adding the ability to use both front- and rear-facing cameras and working out some kinks. And it’s clearly paid off.

Nick Bilton of the NYT noticed just a few days ago that there seem to be more Vine shares on Twitter than Instagram for the first time ever, thanks to a handy graph from Topsy Analytics.

This could have something to do with the fact that Instagram pulled Twitter Card integration to direct more traffic to Instagram.com, but I’m not convinced that that’s a conscious thought running through the minds of Instagrammers as they’re deciding where to share.

What’s more likely is that Vine users want to share on Twitter because the Vine ecosystem is still growing, and those users want to ensure that their creation gets as many views from friends as possible. Then add to it the fact that Vine launched on Android just around the time that Vine.co shares surpassed Instagram.com shares, and it’s clear that Vine simply has a growing group of people interested in using the service.