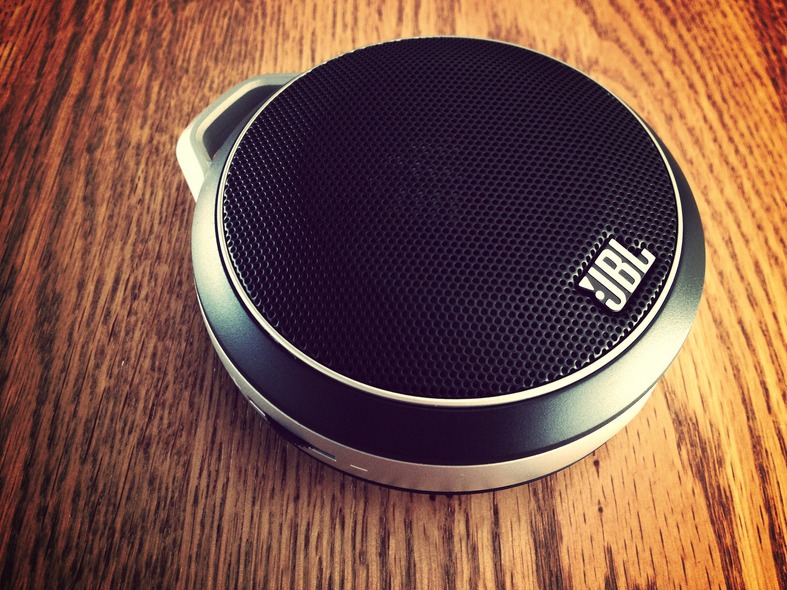 The JBL Micro Wireless is an extremely portable speaker. Lightweight and compact, it’s small enough to fit into your pocket or clip onto your clothing. It also has a loop at the top for hanging or mounting.

The speaker is Bluetooth-enabled with audio jacks for non-Bluetooth devices. It boasts good output for its price, and you can also amp up the sound with multiple speakers by daisy-chaining JBL Micro Wireless speakers together. The speaker charges via USB cable. 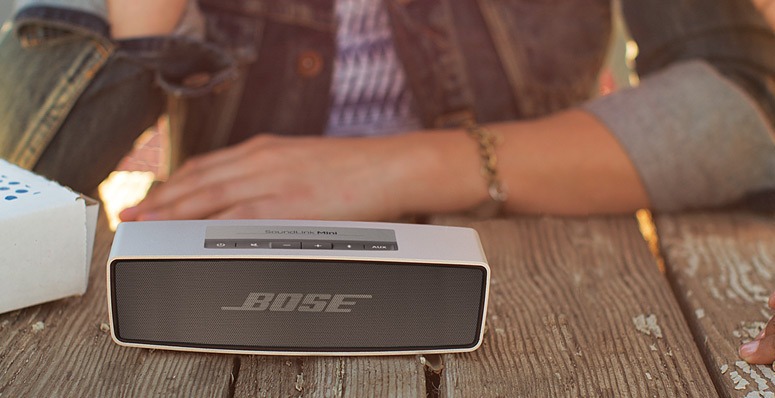 The Soundlink Mini features a sleek and sturdy aluminum casing for durable portability. The speaker is Bluetooth-enabled and remembers the most recent six devices for fast connectivity. You’ll find an audio jack for non-Bluetooth devices; however, the Soundlink Mini does not have an integrated speakerphone. With up to seven hours of battery life, the speaker also plays while it charges on its dock. It falls a little on the steep side in terms of price, but the Soundlink Mini offers a good sound in return. 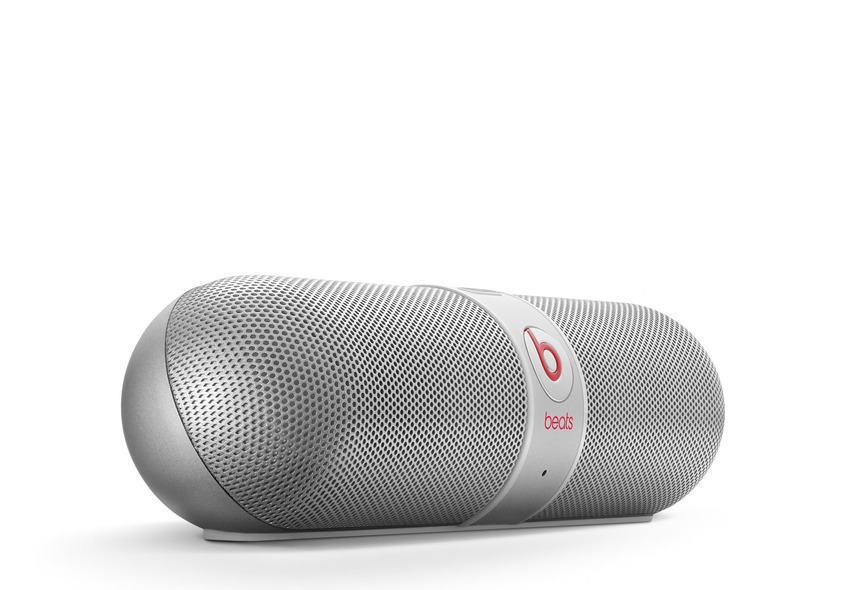 The Pill is big on style and doesn’t skimp on sound, either. Other perks include tap-to-pair connectivity for NFC-enabled phones and pass-through audio with both audio in and audio out jacks. Not only does this allow you connect non-Bluetooth-enabled devices to the Pill, but you can also use the Pill as a middleman to receive Bluetooth-enabled devices, plus project through another speaker or home system by using the audio out port. The Pill also has speakerphone capabilities, a feature some of its counterparts lack. 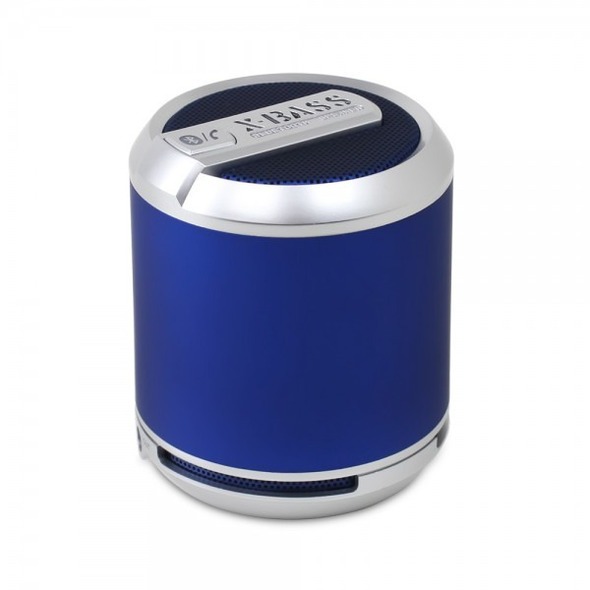 The Bluetune speaker is a great budget speaker with comparable sound for its low price. Additionally, the speaker offers richer bass frequencies than others its size, which is smaller than a can of soda and can actually fit inside cup holders. Six to eight hours of battery life also add to the easy portability. The Bluetune has a mic and is speakerphone-enabled. Additionally, the Bluetune also features an audio out port, so you can plug headphones or other sound systems into the speaker. 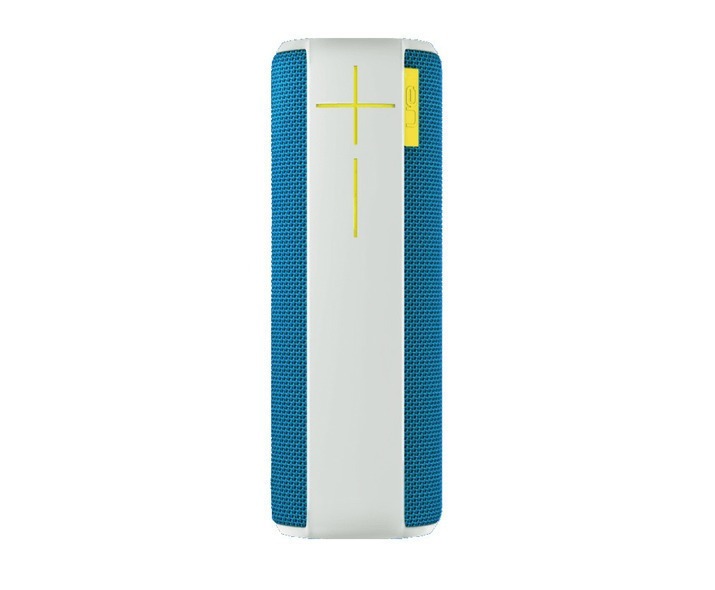 The UE Boom is another extremely portable speaker durable enough for outdoor use, with its water- and stain-resistant skin. The Boom’s compact size makes it easy to throw into your purse or clip onto your bag. It also boasts a 15-hour battery life, fairly long for a Bluetooth speaker, and has 360-degree sound. Additionally, you can daisy-chain two speakers and make a sound system with real stereo separation. Finally, the UE Boom also has speakerphone capabilities. 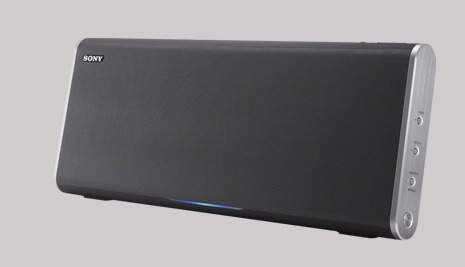 While not as portable as some of the other speakers on this list, this Sony speaker’s rich sounds will fill a room, despite its rechargeable battery. The Bluetooth-enabled capability also includes tap-to-pair NFC pairing for enabled phones. You can also charge your phone by connecting it via the USB port, and the speaker includes an auxiliary input for other devices. The device is speakerphone-enabled.

The Jambox is an optimally portable speaker that also offers rich and balanced sound. It also features a sleek and minimalist design that is easy-to-use. The speaker has Bluetooth capabilities and is also speakerphone-enabled. Jawbone also has online apps that can also complement the Jambox. Furthermore, you can now make your own customized Jambox by choosing the colors of your “grill” and “caps.” 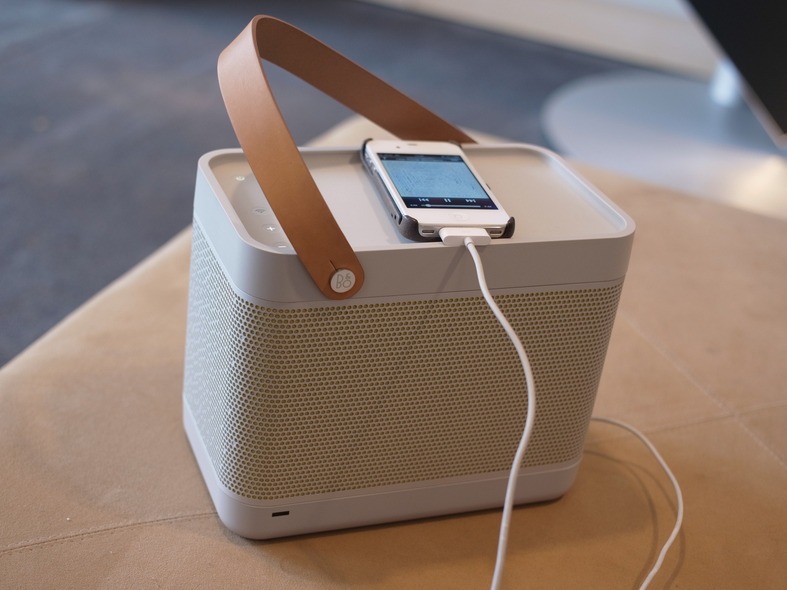 The Beolit 12, one of the products in Bang & Olufsen’s “budget” line B&O Play still comes with a hefty sticker price, which may be worth it if you’re willing to fork over around $800 for high-end sound and lifestyle design. The AirPlay-enabled speaker is portable with a sturdy handle, non-slip surface and built-in power supply. The speaker has an eight-hour battery life, or up to four to five hours when running AirPlay. It can also charge iOS devices as it plays them and features other ports for non-iOS devices.