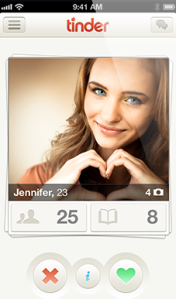 Digital dating is nothing to scoff at; it’s a big business, and it’s changed a lot of lives — mostly for the better. Yet, while dating has seen enormous progress during the Digital Era, there’s still a lot garbage out there, and the space is still mostly dominated by a handful of old names. A gaggle of dating sites and apps have appeared over the past five years, but few have had real staying power, and many have gone the way of the dinosaur.

While it’s still too early to make any pronouncements, it’s looking more and more like Tinder could buck the trend. Created by Hatch Labs — an LA-based startup backed by IAC, the same Barry Diller-led digital media giant that owns Match.com and OKCupid — Tinder has grown like a weed since it launched in October. A crazy, dating weed.

In part, that’s due to timing, and in part because Tinder is based on a familiar, throwback model, drawing on the same addictive formula behind Hot or Not. Essentially, it’s Hot or Not made mobile, casual and connected to Facebook, but rather than promising to introduce people to their one true soul partner/life mate, Tinder just wants to make it easier to flirt — and get you off your ass to meet people. In the real world.

By focusing on reducing the “creepiness” factor (always a relative term in dating, mind you), reducing spam and by targeting young people, Tinder has been able to find that elusive, exponential growth curve. (Unsurprisingly, it’s initial growth spike came from college campuses, and the average age of its users is still 23.)

It’s also fairly easy to use: It’s free, it doesn’t focus on building traditional profiles, instead pulling basic info from Facebook, is location-enabled, and matches users to other people nearby based on similar behavior, interests and so on. If you’re not interested, you can pass. If you are, it connects you with the other person, allowing you to chat and arrange a meeting offline. 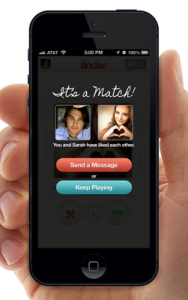 So, while the team is keeping a tight lid on the number of downloads and users it’s attracted to date, from what we do know (and what we’ve been hearing from other sources), it’s safe to assume that both number well into the millions. And keep in mind: The app was released in late October.

Tinder also seems to be avoiding a common trend among popular mobile apps: High number of downloads, but comparatively low engagement. In Tinder’s case, Rad tells us that around 50 percent of users open the app once a day, while approximately 75 percent open the app once a week and around 85 percent use the app every month.

Based on this growth, rumors have been circulating for months now that claim Tinder is in the proces of raising a big round of outside funding, or is in the process of being acquired. At this point, the founder says, neither of those are true. While the company isn’t sharing how much it’s raised to date, we do know that IAC is it’s primary investor, and owns a minority stake in the business, having been the sole investor in its seed and series A rounds (which we hear total in the millions). And the startup was incubated within IAC.

IAC would likely love to own Tinder outright, as would others, but at this point the startup is resolved to stay independent, and go public rather than sell. Of course, there’s a long road ahead, and these things have a habit of changing. Furthermore, while Tinder has opted not to raise outside capital, our sources tell us that this hasn’t stopped venture capitalists from courting Tinder in every way possible.

With plenty of runway ahead and initial growth and scalability snags behind, Tinder has begun to focus more on product development as well as an area that will be key to its future: International markets. To date, 15 percent of Tinder users hail from outside the U.S., the CEO tells us, with the highest adoption coming from Canada, Australia, Brazil and Ireland. (In recent weeks, Rad says, Tinder was seeing 2,000 downloads/day in Brazil.)

Going forward, the team of 13 will begin its international growth efforts in the UK, Australia, Latin America, Germany, France and China, in particular. To do that, the company is working on additional language support, targeted marketing and hiring local reps in each of these countries. Rad also sees big opportunity for growth in Asia, thanks to the explosion of mobile adoption, and is currently working on partnerships that will help it move into Asian markets and localize the Tinder experience to native languages, networks and so on. (Like how to leverage the biggest Chinese and Asian social networks for authentication, as opposed to relying on Facebook, for example.) 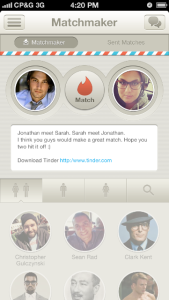 Tinder has also been busy building tools that will help it follow through with its mission to solve social, discovery and networking problems outside the confines of dating. Today, for example, the startup is releasing a new feature called “Matchmaker,” which allows users to create matches between any two Facebook friends — for any purpose.

Once users establish that connection, the two friends can chat within Tinder without sharing their contact information. The idea is to create a casual, simple way to make an introduction, whether you want to set two friends up on a date or make professional connections. Rad tells us that Matchmaker is anonymous and solves the awkward problem of introducing people and then being included on the resulting thread — an annoyance often experienced in email and Facebook intros.

With Matchmaker, the introducer doesn’t have to be removed from the thread, they can send the message to the two people they want to connect, and that’s it. If the recipient isn’t on Tinder, they’ll see that they get a message on Facebook, and they can then quickly create a Tinder login if they want to see the post.

Another cool feature of Matchmaker is that the person who makes the introduction can see if the match is active and they can get a sense of their success rate. Rad assures me that this feature is intended to be high level so that it’s not creepy, allowing users to get just enough of a sense of the activity level of the intros they curate so that they can check back in (or send a reminder) if the conversation goes silent.

Again, the idea is that, while there are plenty of media through which people can make digital introductions, those connections tend to carry more weight if they’re friend-approved. If that intro comes from a close friend, you’re more likely to follow through on it than if not. Of course, there’s the question of whether or not people will want to make introductions in a professional context through a networking that’s primarily associated with dating. For this reason, the startup is launching the feature in beta to test it out and to see if it catches on.

As part of this new release, Tinder is also making some improvements in the areas where its user experience has been less-than- 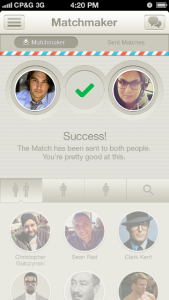 impressive. In particular, many users have complained that the app’s sorting algorithm has matched them with teenage or underage users. (Not cool, Tinder, not cool.) So, in this release, Tinder now includes age filtering, so that users can select their preferred age range, along with making some general improvements to the accuracy of its matching algorithm and improving the speed of chat within the app.

As of now, Tinder remains exclusively an iPhone app, but the CEO tells us that the team is working on an Android version, which will be ready “within the next few months.” The team also has plans to develop tablet apps, but don’t expect Tinder to show up on the Web anytime soon. Tinder is going to remain mobile-centric for the foreseeable future.

In a crowded space, Tinder has, so far, managed to buck the trend and find that elusive, exponential growth curve. Of course, the next year will be critical. As growth inevitably levels out a bit, Tinder will have to keep evolving if it wants to avoid being another flash in the pan. International could hold the key to sustaining that growth, but it remains to be seen whether users will be willing to think of Tinder as more than a casual flirting and dating tool. That could be a tough sell, but if they get there, expect Tinder to stick around for awhile — and be on the receiving end of calls from every VC on the block.