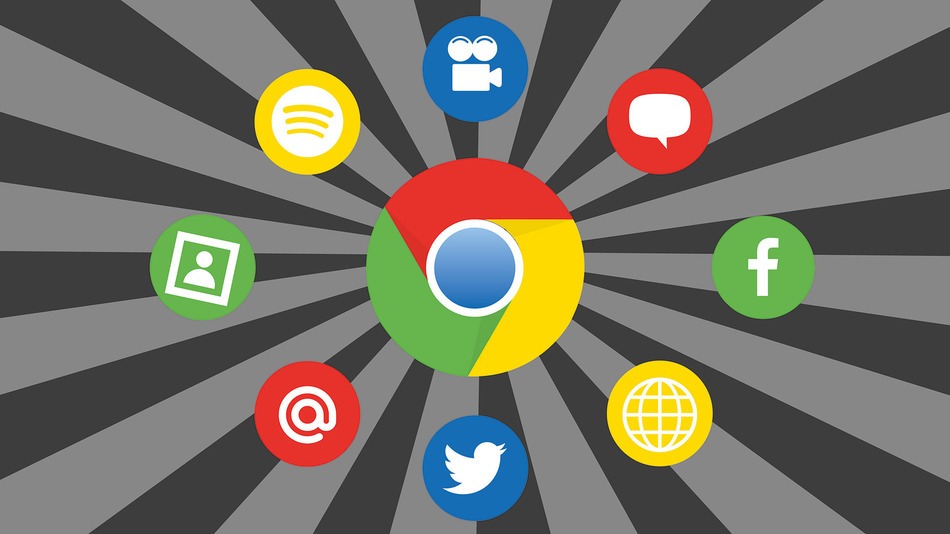 If there’s one thing that ties all your digital experiences together, it’s your browser — let’s presume it’s Chrome. Maybe you use it on mobile in addition to desktop. It gets to know you, and you, it.

But everyone has a few tricks up his or her sleeve.

We did a little recon and found quite a few Chrome extensions that impact and enhance the way we use social media. See, most social sites try to keep things simple — if they add too many features, it would start to confuse people, especially new users. Other sites are plain lazy and haven’t added that one feature everyone wants. But it might exist in extension form, and while you cannot impose it on others, you can apply it to your trusty Chrome browser.

Have you tried any of these Chrome extensions? Let us know what you think in the comments. 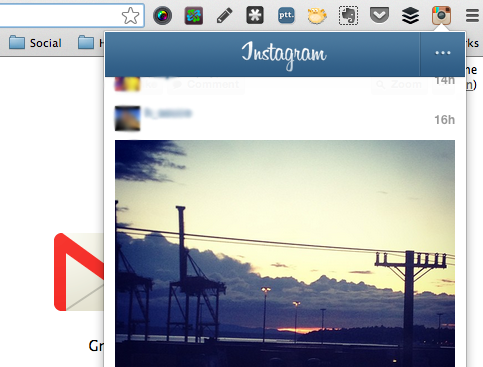 While it doesn’t support Instagram videos quite yet, the Instagram extension easily checks in on your stream without opening a new window. You have access to all the interactions — comments, likes, etc. — but of course you’ll need your phone to post a picture. Taking a quick Instagram break is a nice respite from any work day, and this extension makes it seamless.

Reddit is not a pretty site — the focus is the content and minimalist functions, so the platform does without any bells and whistles. But wouldn’t you like just a few customizations? This extension can set your personal tastes, including a dark or light background, giving Reddit that Tweetdeck glow. One of my favorite functions, shown above, gives you more info about a user when you mouse over his or her username. 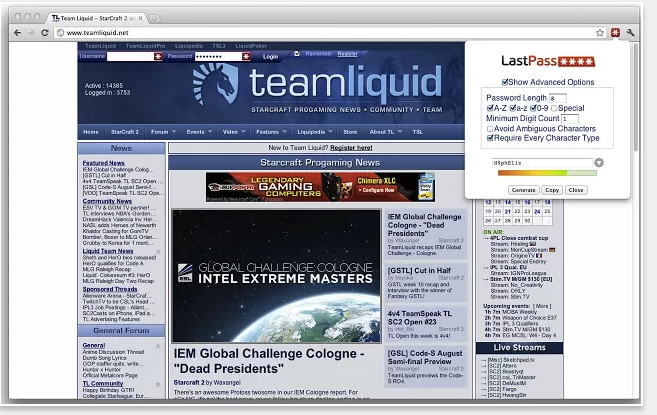 Some common recommendations for strong passwords: Use bad grammar and never apply the same password to multiple sites. If you’re constantly creating accounts for new sites — social media managers and job searchers, this means you — then LastPass can auto-generate a good password and save it for you.

The extension will fill out forms when you return to the site to log in. 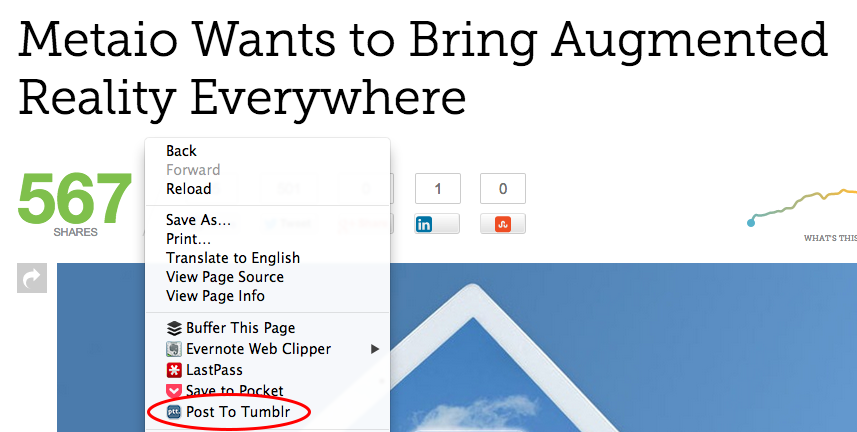 While Tumblr can be considered something of a blog, most users pick up content somewhere else and curate it, as they say. Whether you’re reading an article or come across an awesome GIF, the extension allows you to Tumbl it without leaving the page. If you select text on a page, the extension will post it as a quote — other options are link, photo or text.

You also have access to any of your many Tumblr blogs. You can send page content to drafts or your queue. Pro tip: The Post To Tumblr icon will show next to your other browser extensions,, but just right-click to use it.

If you’re the kind of person actively trying to grow a social following, or if you’re insecure about sharing the right things on Facebook and Twitter, use Bitly. The site started as a link shortener, but now provides analytics on those shortened links. If you get into the habit of using it when you post to social media, you can keep track of what was successful.

The extension is more intuitive than relying on various sites’ share buttons. It allows you to customize your post, but you don’t get a visual of how your post will look on Facebook, so personally, I still tend to open Facebook and post there (to make sure the right image shows).

Evernote is a great tool — so many people use it for so many different purposes. The Web Clipper tool allows you to use it a little like Pocket; however, instead of formatting a news article, this tool saves and organizes content. You might use it for a research project or recipe box, for example. The content of the web page you’re on will save to one of your notebooks.

Pocket is essentially the DVR for content. Generally, users send articles they encounter on the web to their mobile devices, where they can read the content later. You can also use it to collect articles and refer back to them later.

I used the bookmarklet for a long time, but the extension is so much better. If I’m on a page and decide I can’t read it all now, I hit the icon in my browser to save it. But on both Reddit and Twitter, I don’t even need to open the link — I can send it automatically without leaving the stream. It makes both these sites much more efficient for finding news. The extension was built to work with Google Reader, which is shutting down, but presumably it will update to work with Digg’s reader and other new, similar apps.

We’ve been emailing images to each other since I can remember, but for some reason Gchat hasn’t picked up the same ability — which is frustrating. With this extension, you can drag and drop an image from your desktop into the chat field and send it. It will appear as a link for your friend — as shown — but will preserve its original size. Easy.

Any social site before Pinterest is full of white space and text, but we really just want to look at pictures, right?

An amazing extension you won’t ever want to give up, Hover Zoom will open a larger version of thumbnail images when you mouse over them. This includes Twitter profile pictures, Google search images but most importantly, GIFs on Facebook — the site doesn’t support GIFs and you would normally have to click through to see one, but now Hover Zoom displays it for you. Genius. 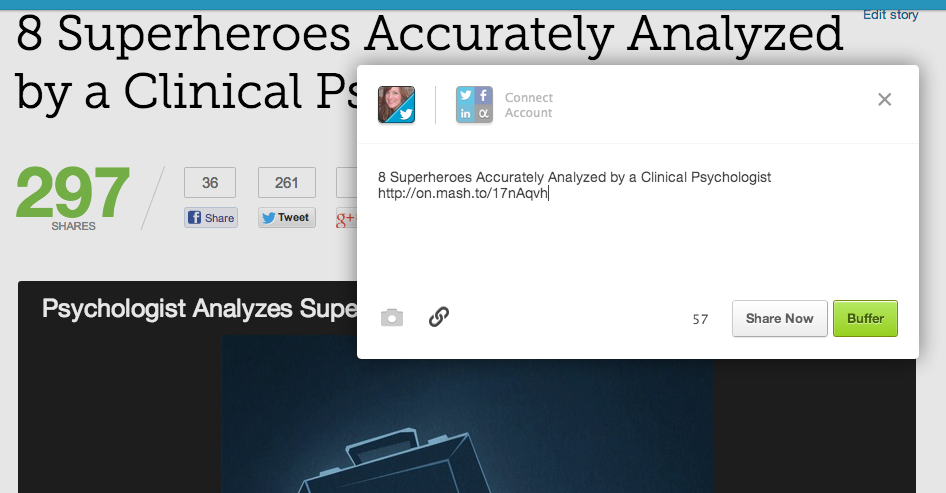 Buffer is a tool for queuing tweets and Facebook posts. You don’t want to dump a dozen heavy, intellectual articles on your followers first thing in the morning, do you? Many sites have a Buffer share button, but if you use the service at all, you’ll want the extension.

Use it like Bitly, with the caveat that you can either post immediately or “buffer” (you can also auto-shorten links in Buffer, if you’ve connected Buffer to Bitly). When you compose a tweet, for example, you can buffer directly from the Twitter.com homepage. When you retweet, you’ll have the option to buffer. It allows you to do all your tweeting in condensend chunks, without dominating the stream at once. 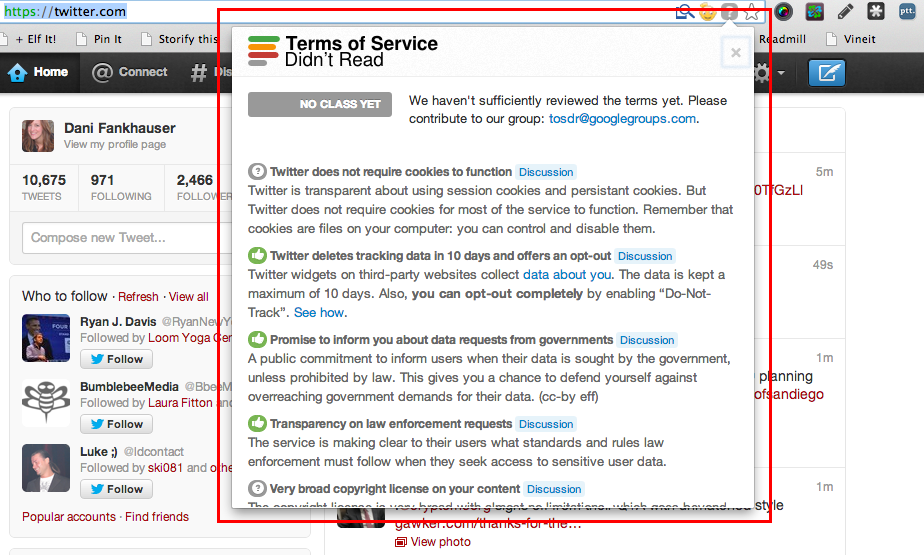 Most social sites have strict terms of service, which lay out how the site will use your information and data. Instagram came under fire last year for updating its terms in a confusing and possibly unfair way — meanwhile, most people have never read terms on any site. That’s why Terms Of Service Didn’t Read decided to make an extension.

You’ll see a letter or a grey question mark on the far right-end of the web address, which tells you more about the terms of the site you’re on. There are actually ongoing discussions for every site, as well, so the community can get involved in figuring out whether a site’s terms are “fair.” Not every site is rated yet, but hopefully it wil provide some guidance for web users.